On May 9th the first of this year's 3 Grand Tours, the Giro d'Italia, commences from Belfast, Northern Ireland. This year's race is Cadel Evans' Tour de France, as he won't be competing in the French Tour for the first time in a long while, certainly since I can remember. Hopefully he can even better his performance of last year when he finished third to Vincenzo Nibali and Rigoberto Uran from Colombia. What cycling enthusiast could forget the climax to last year's final mountain stage, carried out in driving rain up the Tre Cime di Lavaredo.

While not quite the box-office extravaganza of its French rival, the Giro is just as compelling and certainly boasts as many formidable climbs; climbs such as Monte Zoncolan, which will be provide the setting for the races's climax.
﻿﻿﻿﻿﻿﻿﻿﻿﻿﻿﻿﻿﻿﻿﻿﻿﻿﻿﻿ ﻿
﻿﻿﻿﻿﻿﻿﻿﻿﻿Another great Italian climb (though not included in this year's event) is Blockhaus, 180 kilometres east of Rome, in the Della Majella National Park. '...Literally meaning “stone house” in German it got its name from a tiny garrison built during the mid nineteenth century to help control the increasing lawlessness in the Abruzzo Hills. The mountain is part of the long Apennine chain that covers 1,400 kilometres from Savona in the country’s northwest to Reggio di Calabria in the south. 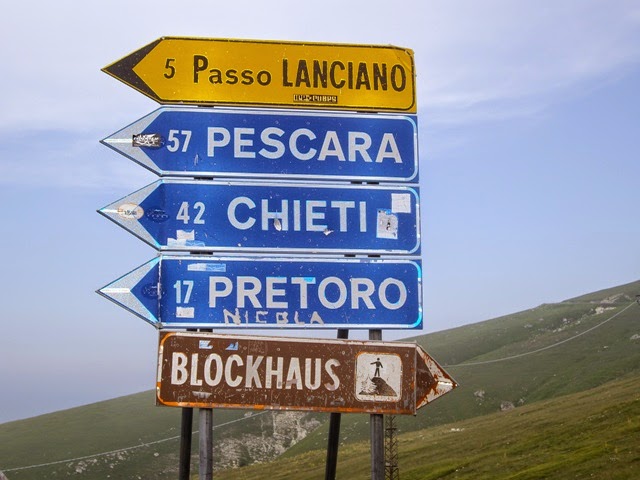 The first hour’s ride – above 8% – seemed long and arduous in the hot summer sun. But once above the tree line the gradient eased and so too, surprisingly, did the heat.

All of a sudden the views below opened up while the names of some of the Tour greats, emblazoned in white graffiti along the bitumen, told me that the summit wasn’t far away.

The antennaed view ahead reminded me of Mont Ventoux. Though white marble was replaced by green grass, the slope was just as barren. Then there were the black and white ski poles marking the steady 9% approach up to the zigzagging lacets just below the summit.

Evidently still a military outpost, I was stopped by a soldier barely a few hundred metres from the top. Two army vehicles were parked by the side of the road and next to them was what appeared to be a mess tent. Some alluring smells coming from inside were accompanied by a cloud of steam hovering above half a dozen soldiers’ heads. Obviously not included on the guest list for lunch, the soldier gestured for me to keep on moving in the direction I was travelling. Relieved, though left feeling somewhat famished, I remounted my bike and pedalled as far as the road would take me. And above the clouds, with breathtaking views from the mountain’s summit, that was as far as I wanted to go...'
Extract from 'Lycra, Lattes and the Long Way Round'
Posted by markkrieger at 13:39