While Friday marks the beginning of this year's Giro d'Italia, Saturday May 31st is the Italian Tour's red letter day. That's when the race will be truly decided on the mighty climb up Zoncolan. Compared by many with Spain's Angliru, it averages 11.5% over 10.5 kilometres, hovering around 20% for almost a kilometre. This will be the fifth time it has been included in the Italian Grand Tour; the last being in 2011 when Spanish rider Igor Anton was the first to reach its 1,735 metre summit. 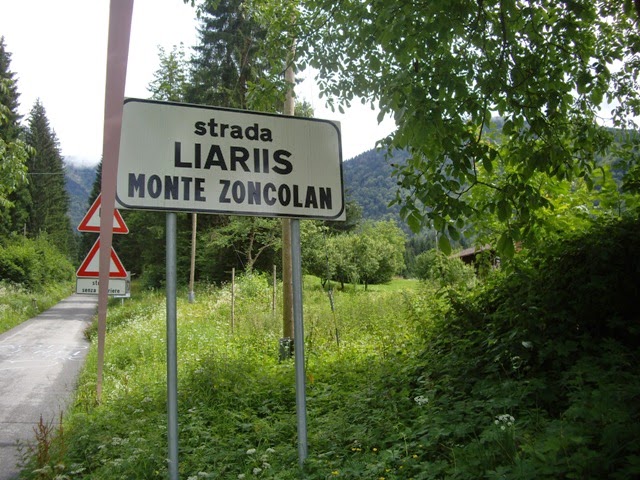 But there's more to Zoncolan than meets the eye. While the climb from Ovaro is considered the most difficult, and therefore most commonly used, the final stretch from its opposite side, Sutrio, is just about as hard as you'll find anywhere. (Perhaps with the exception of some of the passes in England's Lakes District).

But even harder is the ascent from Zoncolan's third side, Priola, which is along the original old road replaced by the newer one from Sutrio. The two routes meet approximately 4 kilometres from the summit. While I've yet to tackle it, it definitely rates as the most difficult of the three climbs, averaging a formidable 12.8% gradient. You could argue that given its steepness from all three sides, even the French Tour's spiritual mountain, Mont Ventoux, is a bit of a dwarf when compared with this sleeping giant.

﻿
'While riding up Monte Grappa was a wonderful experience, one I’d like to do again someday, the thought of climbing Monte Zoncolon, first from Sutrio, then Ovaro, was even better. The harder something is to do the more fulfilling it is when you’ve finally done it. Thanks to Roz’s determination to get us deep into Northern Italy, virtually to the Austrian border, it became a distinct possibility that within twenty-four hours I’d be attempting the formidable climb up the mountain.

With an average gradient of 11.5% from Ovaro, I couldn’t wait to get back on my Bianchi and find out what this climb was all about. Like most new experiences, I was excited, yet apprehensive at the same time. Monte Zoncolan was rated the second hardest climb in Trev’s cycling magazine, ahead of renowned Italian climbs like Mortirolo, Passo Dello Stelvio and Passo di Marmolada. It was going to be no pushover.
Then came the bad news. After being told at the local Information Centre that snow was blocking the route up from Ovaro, my only alternative was to climb the mountain from Sutrio, on its eastern side. It seemed so disappointing having changed our plans, driven such a long way and forfeited a night’s accommodation in Bologna. Nevertheless, twenty-four hours earlier, I had no idea that I’d be anywhere near Zoncolan, let alone climbing it from any side at all. Like the little kid who keeps pestering his mother for two scoops of ice-cream, only to get one, it seemed like I would at least get a taste.

The 13.5 kilometre climb up Zoncolan from Sutrio is three kilometres longer than from Ovaro, while the average gradient is 8.9%. But the last three kilometres are sheer hell. I was travelling as slowly as 5.6 kilometres per hour and was lucky to average between six and seven along the incredibly steep and narrow road. It was 20%, even more in some places. It took me a little over eighty minutes to reach the top, but as good as it was to get there, my next sixty seconds were spent gasping for air.

But climbing Monte Zoncolan from Ovaro is even more of a test. I didn’t know it at the time but it is widely regarded as being more difficult than Spain’s Alto de l’Angliru itself. Standing on the small asphalt apron that is the summit, I simply stood savouring the view as I waited for Roz, who had begun walking up from the chalet below. All of a sudden I noticed two bike helmets bobbing up and down, just below the crest of the road. It could have been the opening scene of Monty Python’s The Holy Grail. The only thing missing were the coconuts. In reality, it was two cyclists who had chanced their luck on the road up from Ovaro. Turns out the only snow they saw was on the side of the road. After exchanging a few pleasantries and anecdotes about recent climbs, we parted company, but not before thanking them for literally bobbing up at exactly the right time. (Had they not successfully tested out the toad from Ovaro, I would have been none the wiser). They took the road down to Sutrio while I continued to wait for Roz, who like me, had ‘slightly’ underestimated the last three kilometres of the climb.


As I soon found out for myself, there was absolutely nothing barring the road up from Ovaro, except perhaps the 11.5% average gradient. The distance to the summit is only a meagre 10.5 kilometres but there is no respite after the first two. The most gruelling part of the climb starts just as you leave the village of Liariis and continues for the next six kilometres. During the middle stages, the gradient hovers between 13 and 20%, which accounted for my five kilometres per hour speed. It was unrelenting. About half way up the mountain, I was passed by a much younger and undeniably fitter Italian rider. Whether or not he spoke any English didn’t matter, as it was hard enough filling my lungs with oxygen, let alone trying to squeeze out some barely discernable words. My competitive instincts, stupidly told me that I should try and keep him in my sights, at least for a while, but it wasn’t long, only two or three switchbacks, before he was in the ether. 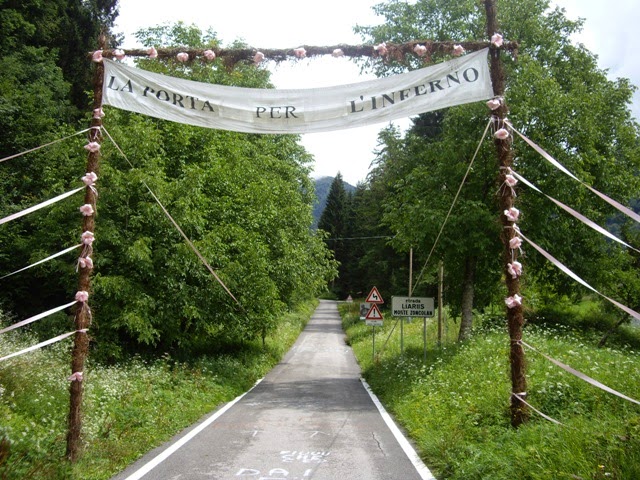 Unlike the eastern side – from Sutrio – the final kilometres weren’t as tough. While still averaging around 7%, I could at least enjoy the view as the side of the mountain opened up in front of me. Three short tunnels and snow along the road’s edges were a further diversion from the continual climbing. Once at the top, I didn’t need to hang around, save for a brief conversation with the young Italian rider who kindly waited for me to appear. The shout of “Bravo” as I came over the crest for the second time, was an unexpected surprise. I thanked him for his kind gesture and we shook hands before descending in different directions. Though total strangers, there was a mutual respect for having completed a rather formidable task, though as some might say, a rather silly one too'.