What a perfect afternoon for riding your bike. Warm, hardly a zephyr of wind and destination Arthurs Seat. Monday is the quietest day to ride your bike up the 8.1 percent gradient and today was no exception. Save for a few people out for a coffee or to take in the panoramic view of the Mornington Peninsula, the Dandenongs, the city of Melbourne and the You Yangs beyond, there was hardly a car to be seen. On the first of my three climbs I met another cyclist on his way up on a mountain bike. He was a local, from Dromana, named Rick, and has been riding up Arthurs for the past 12 months: almost every day. After our brief conversation, he explained that it wasn't just for physical exercise but for the solitude and serenity that a quiet ride up a lonely hill can bring. We could all learn a lot from his view of life. It's not how fast you travel along your journey but the manner in which you move yourself along.

Here's an excerpt from my book about my own view of my beloved Arthurs...

I Have a Pimple 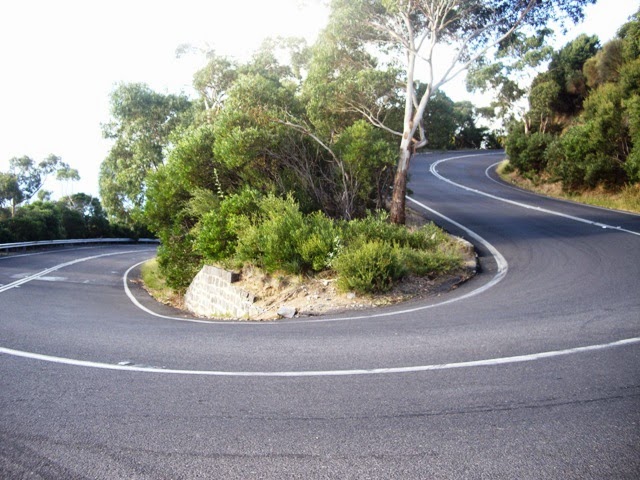 Not 12 kilometres from where I live, is a “pimple” called Arthurs Seat. On the C789 road, it’s a 305 metre mountain which rises abruptly from Port Phillip Bay, just outside the quiet bayside suburb of Dromana. It’s obviously not that tall as mountains go, but if you were a local and a cycling masochist, like me, chances are it would just about be your favourite spot.

Arthurs Seat was named after its Scottish namesake in Edinburgh, by an English Lieutenant, John Murray, during the first exploration of Port Phillip Bay, in 1802. Despite its rather unimpressive height, it’s probably the most familiar of all Port Phillip Bay’s landmarks. On weekends – and over summer especially – tourists come here in droves to walk, picnic, drink, get married or just take in the spectacular view of the Bay and Port Phillip Heads. But cycling nuts prefer the mountain all to themselves, and there’s no better time than a weekday in winter, or better still autumn and spring, to simply get on your bike and head up the hill.

Now it’s starting to sound as if I’m beating my chest, just a tad, about a piddly little bump on the horizon. After all, Australia itself is hardly recognised for its massive peaks. Indeed, Mount Kosciusko, the country’s highest mountain at 2,228 metres, is over seven times the height of Arthurs Seat, while the Cime de la Bonette in the French Alps, at 2,802 metres and supposedly the highest paved through road in Europe, is more than nine times its height. At first glance it’s like comparing the size of a golf ball with that of a basketball. But despite its meagre 3.03 kilometres, this granite hill is remarkably steep. For half its length it has a gradient of 9.5% or more, with an average of 8.1%. That makes it steeper than France’s Col du Tourmalet, Hautacam and Italy’s Passo dello Stelvio.

Now Arthurs Seat might be a pimple, but you’d hardly call it ugly. To start with, it has many moods due to its position on the coast and Melbourne’s ever-changing weather. You can be dry at 100 metres, yet at 80 metres from the top you’re riding through drizzle or mist. On sunny days you have the most beautiful views of the Bay below. Some things change, like the mood of the sea, but some things never do, such as the McCrae Lighthouse, Rosebud Pier, the town of Dromana and the Spirit Of Tasmania ferry which tirelessly ploughs its way back and forth across Bass Strait.

And of course there’s the familiar sight of the dredger which prowls the bay like a giant crab with its hidden pincers bulldozing the seabed below. For more than two years there was heated debate as to whether the Bay should be dredged to allow larger ships access to the Port of Melbourne. The environmentalists put up a considerably strong and emotional argument, as they generally do, however political and economic pragmatism won the day, as it generally does. Meanwhile, the dredger quietly goes about its work, while the majority of people are now almost oblivious to its presence.

Arthurs Seat has a few other local masochists whom you have a good chance of meeting on your way up or down the hill. That’s one of the attractions: stumbling across people like yourself who love the freedom of riding a bike. My mate Trev is one such character. He climbs Arthurs at least two or three times a week. Riding up together one Saturday morning I remember him saying, “I’ve never been so shithouse at something I enjoy so much.” To me, that perfectly encapsulates how easy and enticing it is to ride a bike up a hill. All you need is a pair of legs, a bike with the appropriate gear ratio and, most importantly, the willpower to do it. Trev isn’t quick, but he loves it.

As for me, aged 55, I still experience goose bumps on the back of my neck whenever I think about the sheer exhilaration of riding. The freedom you feel amidst your own solitude, the wind in your face and even the pain of the climb. When you’re on your bike it’s as though time stands still. It’s just you, your bike and the road out in front of you.
Posted by markkrieger at 23:49