The Col du Tourmalet is the most frequently visited mountain in the Tour de France. Since the introduction of mountain climbs way back in 1910, it has been included in the famous race an incredible three out of every four years. 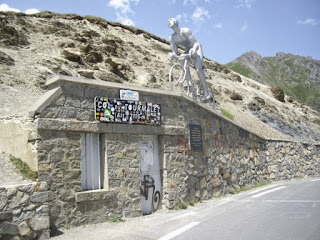 ...Its summit height of 2,115 metres, makes it one of the highest climbs in the Pyrenees. While it has only twice hosted a stage finish, it has provided its share of epic battles and controversy over its 77 appearances and 100-year history. Probably the mountain’s most famous incident occurred in 1913 when the race favourite, Eugene Christophe, suffered incredibly bad luck. First to reach the top of the mountain, he momentarily stopped to reverse his back wheel to change his gear. He was the clear leader by a long way and in a strong position to win the race overall. But on the descent, tragedy struck when his front forks snapped. Whether it was a weakness in the metal or the state of the roads, or perhaps both, the rider was reluctant to blame his Peugeot sponsor for his unfortunate mishap. Whatever the cause, the resultant mechanical failure cost him the winner’s prize in Paris.

Today, the rider’s support team would have the problem fixed within minutes, or even seconds. Like a tennis player who breaks a racquet string, they’d simply replace the broken apparatus with a new toy, all in the blink of an eye. But almost a century ago, poor Eugene Christophe wasn’t afforded that luxury. Blinded by tears, he slung his bike over his shoulder and headed down the valley to the nearest blacksmith, 10 kilometres away. If that wasn’t an impossible enough feat in itself, new strict team guidelines prevented riders from receiving any help whatsoever. So rider became pack-mule, became welder, as poor Christophe set about repairing his own bike. Ironically, as well as losing all the time spent in getting down and back up the mountain after making his own repairs, he was penalised a further three minutes for accepting the help of a young apprentice who pumped the bellows for him as he worked. Yet despite all these setbacks, he still managed to finish the stage within the time limit, a testimony to his incredible tenacity and willpower.

Eugene Christophe ultimately finished seventh in the Tour of that year. You could argue that he was almost as unfortunate the year before, when he completed the 5,289 kilometre circumnavigation of France at a higher average speed than eventual winner Odile Defraye. Before the 1913 decision to award the race to the rider with the shortest average time, the winner was decided on a points-only basis.

Seven-time winner of the French-cyclo-cross, Christophe would obviously have been a deserved winner of the country’s most famous race. But it was not meant to be. Introduced after Stage 10 of the 1919 Tour, he became the first man to wear the maillot jaune, the Tour’s famous yellow jersey, after leading the peloton into Grenoble. Once through the Alps, Christophe held a 30 minute advantage over his rivals, with less than a dozen of the 69 original starters still remaining.

But it's no wonder the French invented the phrase "déjà vu". With just two days of riding left to complete, Christophe tragically suffered the same fate that befell him six years earlier. Broken forks! After walking his bike to have it repaired, he had lost more than 70 minutes to his rivals, leaving him in third place by the time the race reached Paris.

As he was such a gallant - and unlucky - loser, Eugene Christophe’s series of near misses aroused public interest. Though he did not win the race, he was awarded the same prize as the winner, another Belgian rider, Firmin Lambot.

Christophe’s stories have become part of Tour folklore. In 1951, the French Cycling Federation erected a plaque on the wall of a building in Sainte-Marie-de-Campan. It was here, at the site where the blacksmith shop once stood, that in 1913, Christophe carried and repaired his own bike so he could continue the race. Beaten but not defeated, his sporting story has a simple message for living: Never give up! 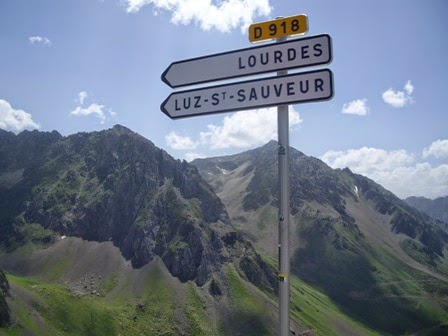 My journey up and down the Col du Tourmalet was not as tragic or eventful as Eugene Christophe’s, but it was memorable nonetheless. While certainly a hard climb - with an average gradient of 7.4% from Luz-Saint-Sauveur – I found it a little friendlier than the Col d’Aubisque. Perhaps it was because it was my first climb of the day or perhaps I was becoming more used to climbing again, having ridden more than 2,000 kilometres over predominantly flat roads. Whatever the reason, a positive mindset helps, and I had one. I was desperately looking forward to climbing the mountain, and despite the oppressive heat, the day was just about perfect.

Two kilometres from the top, another Route Baree sign reared its ugly head, indicating that road works were being undertaken. In fact, many of the roads I’d been travelling along through the Pyrenees were undergoing road maintenance. Once I reached the roadblock in question, not a lot was happening. There were these three guys with work helmets on, just standing around and sipping cans of soft drink in the scorching sun. A giant excavator stood blocking my way, and huge boulders seemed strategically placed right to the very edge of the road. Making excellent use of the chasm below, they couldn’t have been better positioned than chess pieces surrounding an opponent’s king. Sitting on that dusty, deserted road, the whole scene reminded me of a nuclear missile silo somewhere out in the middle of a desert. Just a dangerous deterrent, it served no other purpose, today anyway, than being an ugly reminder that it would be better if it wasn’t there. Fortunately, none of the workers batted an eyelid as I picked up my bike, scrambled cautiously over the boulders and got going again. I guess they were used to the sight of silly cyclists climbing up mountains in the Pyrenees.

The top of the climb appeared more quickly than I expected. What’s more, when I got there I was met by a hive of activity. Totally opposite to the Col d’Aubisque’s cool and remote summit, I was greeted by 20 to 30 cyclists drinking beer, snacking, checking out the souvenir shop, or just taking snapshots of the mountains, and of each other. It was a bit like arriving at a Boxing Day bicycle sale, where you get a free sausage in bread with every bike purchased. On the descent, I passed many more riders travelling up the mountain’s eastern slope from Sainte-Marie-de-Campan, and the site of Eugene Christophe’s famous blacksmith shop. Fortunately, the road and my Bianchi’s front forks were in better condition than his...