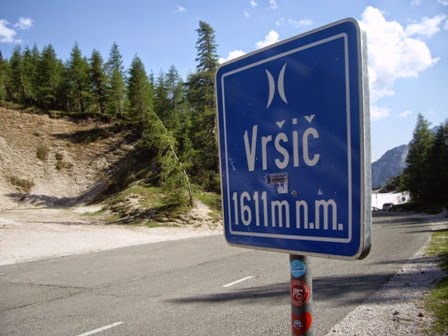 Here we were in northern Slovenia, having crossed the Italian border from Tarvisio. Our introduction to the country was two nights’ accommodation in the peaceful rural village of Rateče, which is tucked in the country's north-western corner.

"Why Slovenia?" you may ask. Having ridden along many roads in Austria and northern Italy I thought 'Why not Slovenia as well'. After all, it's renowned for its beautiful countryside, its mountains, its quieter roads, and, as we quickly learned, its fine food and charming hospitality. Approximately one tenth the size of the state of Victoria (Australia), twelve hundred kilometres would be just about enough to circumnavigate the entire country. An independent republic since 1991 and with a population of only just two million, it would be interesting to compare it with its larger and more popular border neighbours.

The view from our room window was of the jagged, snow capped Julian Alps. Like the Italian Dolomites, this vast limestone range is a popular tourist destination. It is also home to Slovenia's highest road pass, Passo Vršič (1611m) connecting Kranjska Gora in the north and Bovec, 45 kilometres to the southwest.


Only a 12.5 kilometre ride from Kranjska Gora, the climb doesn’t truly begin until 9.25 kilometres from the top of the pass. But with its 8.2% average gradient and 24 cobblestone hairpin bends – 50 in total - along the way, it’s nevertheless a formidable challenge.

Also called the Ruska cesta (Russian Road), the pass was largely built by Russian prisoners of war during the interminable conflict between Italy and the German, Austro-Hungarian alliance in World War I. Four kilometres into the climb is the monument to the 400 Russian POWs who lost their lives in an avalanche in March 1916.
﻿﻿