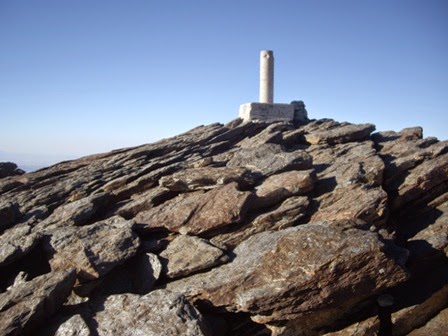 Up until 12 months ago the highest mountain I'd ever climbed by bike was the Cime de la Bonette. A brute of a climb - as mentioned in an earlier blog - it stands at 2,802 metres, the additional 80 metres of landfill making it, according to the French, the highest road pass in Europe.

Add another 500-plus kilometers and you get the Above Classification climb, Pico de Veleta,which stands prominently in Spain's Sierra Nevada Range. Way higher than any road mountain used in a Grand Tour, and with snow permanently fastened to its desolate moonscape summit - even during the height of summer - you could say it was something of a cycling anachronism.


My homework suggested that Monachil was the best location to begin my climb up the Pico de Veleta. Firstly, we didn't fancy spending unnecessary time searching for a starting point through Granada's busy and unfamiliar streets; and secondly, the route from Monachil, via El Purch, with its rugged, rust-colored slopes, looked spectacularly remote. 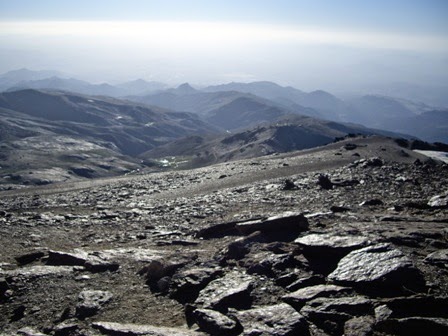 The first part of the climb was exactly as I expected it to be; even the above 9% average gradient over the first six kilometers. Once over the top of El Purch the road descended gently through tall pines, until it met up with the A-395. From here you have two choices. You can turn left and continue descending, along the more traffic-laden road towards Granada, or veer right and simply continue your journey up the mountain. At this point you probably wouldn't want to be told that you still had approximately 2,000 more vertical metres to climb.

A further five kilometers of steady climbing takes you to the old Sierra Nevada road at El Dornajo, its cafe providing one of the few opportunities to reinvigorate your desire to go on. A further 11 kilometres up the road is the Soy y Nieve ski resort, which at more than 2,100 metres makes it a hors category climb (from either Monachil or Granada) in itself. This would be well enough to satisfy the most hardened cycling enthusiasts. 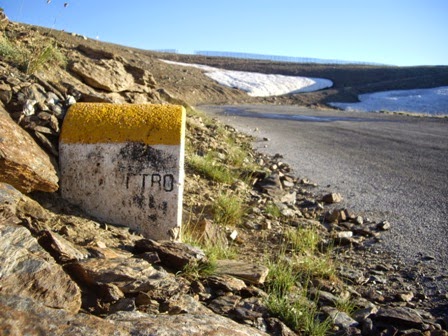 Rather sadly, high-altitude summits like the Pico de Veleta, and France’s Cime de la Bonette, have gradually lost favouritism over the last two decades, replaced by the introduction of extreme gradient climbs, such as Italy’s Monte Zoncolon and their Spanish counterparts, Bola de Mundo and the Alto de l'Angliru.

While pleased to have reached the ski station in relatively good shape, it hardly felt like an accomplishment of sorts. Above the tree line and enduring the heat of the mid afternoon sun, I still had some 1,200 vertical metres to reach the weather vane that marks the Veleta’s peak. Unusual things we cyclists strive for! 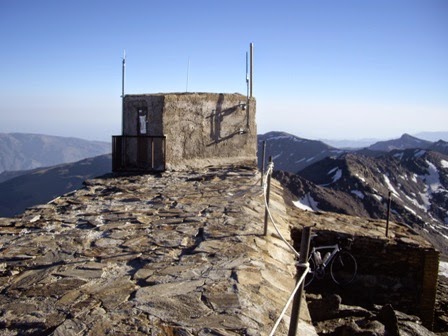 Truth be told, I didn’t really know what to expect, especially upon reaching the narrow, pothole-infested road that barred all vehicles, save for military ones. Despite the road and with no sign of snow up ahead, I at least banked on reaching the military academy, still a formidable 2,550 metres above sea level. 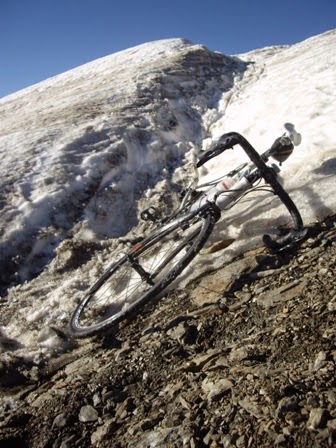 The final 10 kilometres of road to the summit wound relentlessly at a gradient averaging more than 7%. From here the state of the road’s surface became even less predictable, while now well above 2,000 metres, I was more conscious of the air gradually becoming thinner. It’s a well known fact that the less oxygen in the air, the poorer the performance. Needless to say, at 59 years of age my performance was somewhat diminished the moment I mounted my bike way back in Monachil. 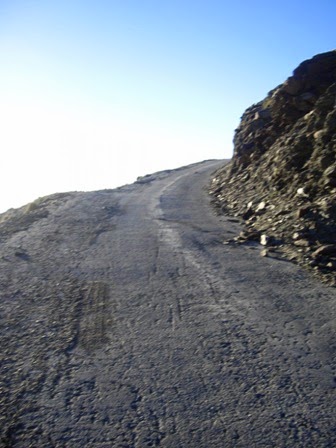 Increasingly narrow and covered with remnants of the thick winter snow, the road at least held together. That is, until the very last kilometre where, reduced to earth and rocks, it limped its way to the summit. Made all the more unwelcome by the line of heavy boulders deftly placed across the ‘road’, I pondered to think that the Pico de Veleta’s summit is not deserving of such a disappointing end.

While the views from the very top were a sight to behold, no matter from which direction I chose to look, I could only imagine the splendour of the snow-capped peaks below during winter.

On reflection, perhaps a mountain so difficult to reach – a desolate moonscape when not laden with snow – deserves better than a summit finish of a heavily commercialised Grand Tour. In any case, it’s not going anywhere if you want it bad enough; whether it be on foot, mountain bike, or even on a road bike if you're silly enough to try.