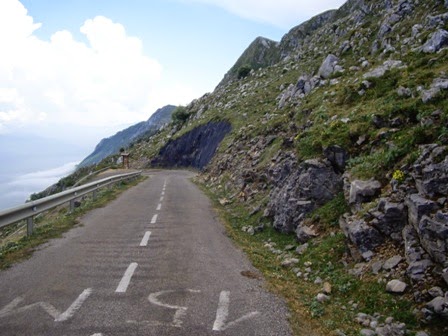 
When I got home I couldn’t wait to see Lore. As usual he was tinkering in his garage, building yet another bike. Sometimes I think that for Lore, building bikes is more of a passion than riding them. “You couldn’t build me a triple”, I asked. Knowing precisely what I was getting at he replied with a grin, “I've got something better than a triple.”

Sometimes willpower just isn't quite enough to get you up a steep climb, a very steep climb. My third, and fourth most recent ascents up Angliru - or La Gamonal as it's called by the locals - were successful, in that when I reached the 23% wall known as Cuena les Cabres, I had 'just' enough spin to keep moving. Sadly I couldn't say the same for my first two attempts.

Here's an extract from my book which describes just that, my first attempt up Angliru; probably to most, a silly obsession but one that has drawn us to the Spanish Asturias three times: 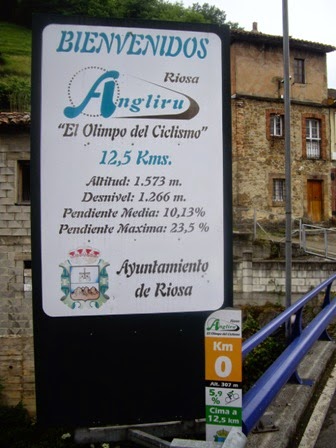 Finding, let alone climbing Angliru was an absolute nightmare. The lack of a decent map, constant backtracking, crowded streets through busy towns, and finally steep, misty and winding mountain roads, prevented us from reaching La Vega, at the base of the mountain, until around 6.00 pm.

Situated in the heart of the Asturias, Alto de l’Angliru stands 1,570 metres above sea level. Over its length of 12.6 kilometres, it gains 1,265 metres in height, at an average gradient of just over 10%. Not introduced to the Vuelta a España until 1999, it is regarded as Spain’s mythical equivalent of France’s Mont Ventoux and Italy’s Monte Zoncolan.

It certainly looked mythical to me as I approached the lead up to the climb. In a shroud of mist I couldn’t see the top of the mountain at all. I came to think this was probably a good thing, for if I had, I might have decided against it. The locals at the La Vega Tourist Office had already advised me not to climb it, as conditions weren’t conducive. “It’s too late in the day,” they warned me. “The weather’s been closing in early. Stay over and do it first thing tomorrow.” Problem was, we were booked in for the night at Valladolid, about 250 kilometres away. 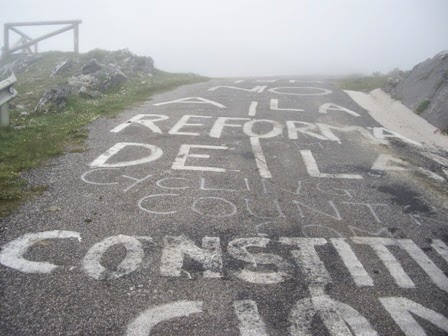 Given the conditions and the lateness of the day, I doubted I’d see a soul up there. And the friendly warnings and the damp conditions kept playing on my mind. Needless to say, my assault up Angliru was akin to George Clooney trying to get over that mountain of a wave in The Perfect Storm, Wolfgang Petersen’s dramatic film about a swordfishing boat that becomes entrapped by a freakish tempest in the North Atlantic. Try as he might, he just couldn’t see the top. And in a sea of mist, followed by drizzle, followed by heavy rain, neither could I.

It reminded me of the time, back in 2002, when British cyclist David Millar refused to finish the race as a form of protest against the severity of the climb. With riders continually slipping on the wet and slippery road, Millar himself went down a number of times and was even hit by a team car.

What makes the climb worse is that its first 6 kilometres lull you into a false sense of security. It averages less than 8% and there is even a short descent. No problems, I naively thought. If I can climb Arthurs virtually blindfolded, I can do this. 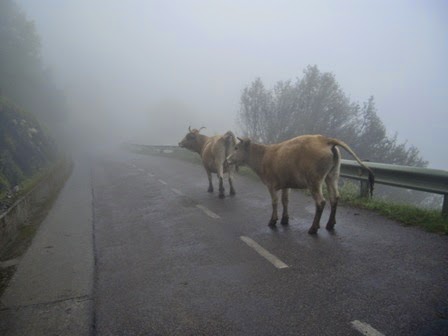 Then the weather kicked in, and with it came a sudden rise in steepness. Unlike yesterday’s climb, there were no views whatsoever. It was hard to see more than 10 metres in front of me. By the time I reached the steepest section, 23.6%, just 3 kilometres from the summit, my bike was spent and so was I. My wheels were slipping on the wet road and my gears were as low as they could go, at 34/29, but I kept at it for as long as I could turn the pedals.


Then, in the midst of a mist as thick as pea soup, I came to a sudden, abrupt stop. My back tyre had run out of traction, and my lungs out of air. All power gone, I felt like one of those solar lanterns that only work when the sun’s out. I’d never done that before, except in an event where I cramped up on a flat road. I guess I felt a bit like David Millar, but I didn’t have any race officials to yell at. In any case, it was my own fault. I’d been warned not to go up so late in the day.

Despite stopping a number of times, all within a 300-metre stretch, I did at least make it to the top. Or at least what I thought was the top. Allowing myself to roll for about 50 metres, all I could make out in the haze were a few cows alongside me. 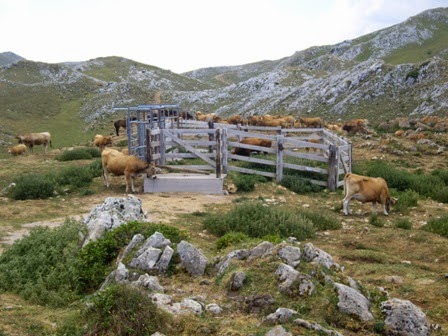 With visibility reduced to no more than an arm’s length, my main concern became getting down the mountain in one piece. I could barely see the next white line in front of me, let alone the edge of the road. Cold, wet and virtually blind, I had to run the bike down the first few kilometres. Even then the road was so slippery that it was hard to pull up around each tight corner. Feeling a little reckless for having attempted the climb in such conditions, I was finally able to get back on the seat and freewheel my way down more safely.

It was a relief to see Roz near the bottom. She had my dry clothes and, finally, something to eat. All we needed now was a hot drink. Later on, I enjoyed hearing her say that despite all the driving, and the conditions on the mountain, it was still worth the effort. We didn’t even see the top of it, or its shape, just the narrow bitumen road and the tight 180-degree corners, but you could feel it and that was good enough—for now, anyway. 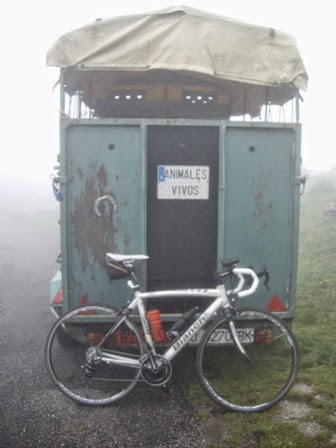 Remember, it’s the journey, not the destination.
Posted by markkrieger at 05:58