Sometimes Things DO Go To Plan… The Puy de Dome 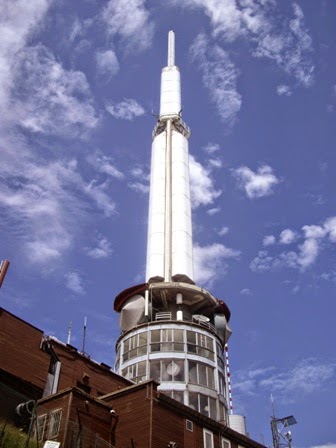 For every negative there has to be a positive; somewhere, sometime, eventually. A metaphor for life, the yin and yang of my cycling adventures have always been like this. Two years ago I was fortunate enough to have ridden from Sagres (in Portugal) to Paris, France, via the Massif Central. One of the reasons I chose this route was to climb the Puy de Dome, from Clermont Ferrand. Not surprisingly, it was another one of those climbs in Trev's cycling magazine.

Though I didn't know it at the time, it too, like the Genting Highlands, is inaccessible by bicycle. And again, I was a fair way into the climb before I was made to realise that it was.

But fortunately, this climb had a happy ending. It prompts me to ponder the question: What's the difference between two Malaysian police officers and two French security guards who are working their way through university? When it comes to empathy for ageing Australian cyclists (me), quite a lot it seems. 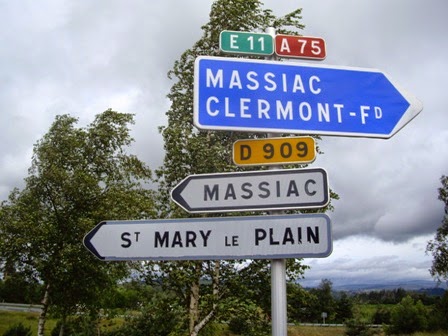 If you were not aware, a puy is a geological term used in the central region of France, for a volcanic hill. Becoming extinct around late prehistoric times, most are clustered together, while some are scattered as isolated hills. Of these, the Puy de Dome is the highest.

Leaving in sweltering heat and humidity from our accommodation at Royat, an outer suburb of Clermont Ferrand, it was a cool 16 degrees within a matter of 30 minutes and a few hundred vertical metres. As I soon learnt, a once classic climb in the Tour de France, the Puy is no longer used by even the Grand Tour itself. A much easier alternative is the nearby Col de Ceyssat, which even compared to my climb from Gombak to Genting Sempah, is a piece of cake. 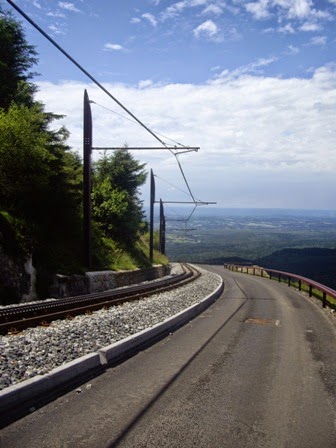 Despite the initial 8% average gradient out of Royat, the next two kilometres towards the car park, at the base of the Puy de Dome, are much easier. I guess the red light, a closed gate and the accompanying warning signs basically saying ‘No Bikes Allowed’ should have been enough to deter me from travelling any further onwards, or upwards. But I thought to myself, We'd travelled a long way to get here, and who knows, this might be the only warning I receive. Besides, there were no police about to provide a stern cautionary notice to proceed no further.

The road runs parallel with a single-track train line that winds itself like a Mr. Whippy ice-cream from the base of the Puy all the way to its summit. Though yet to see any sight of security guards, let alone the police, my next hint of being an unwanted guest was from a train driver who was carrying passengers down the mountain. Though shaking her head backwards and forwards as vigorously as her neck muscles would allow, I interpreted her unhealthy action as a response to my stupidity rather than any wilfull intention to break the law.


Slowly and steadily, I continued up the mountain, almost oblivious to the above-11% gradient over the previous two kilometres. It's amazing how little you feel fatigue when the fear of beight caught takes over.

Suddenly, with just two kilometres remaining, I sighted two security guards approximately a hundred metres ahead. Young guys, and not wearing a distinct military-style uniform, I figured, Why not just ignore them and glide on past. No such luck. No sooner had I stopped when it began panning out for the worst. I tried everything. I explained how I’d come from Australia just to do this climb. I suggested they both look the other way while I quietly rode on by. I told them that my wife had earlier taken the walking track and I was meeting her at the summit. I even said that I was determined to cart my velo up the rocky walking track myself if I had to.
﻿﻿﻿ ﻿
﻿
﻿ With all hope seemingly gone, the train pulled up where we were standing – at the intersection of the walking track and the road – to let out some passengers who preferred to take the track down the mountain. Just then, without hesitation, one of the security guards glanced at me to move on while he and his partner look away.

The next two or so kilometres averaged out at almost 11%. I think it's the fastest above 10% gradient I've ever climbed.

I'll never forget their kindness for allowing me to finish my climb. Certainly a trivial matter in the whole scheme of life. But ever striving towards the most trivial of goals can define who we are.