No sooner had I rolled down the lane from our hard-to-leave accommodation at B@B Profum di Bosc when the heavens opened up. While not as fearsome as the previous evening’s barrage of lightning and thunder, it was just as incessant.

﻿After a brief downhill towards Sutrio, I soon began climbing – about 400 vertical metres - towards Ravascletto. The day, grey and wet and the roads empty, the village seemed as lifeless as the Melbourne Cricket Ground in October. Surrendering the altitude gained by the time I reached Comeglians – just a handful of kilometres further along the road - I pulled over in search of a temporary shelter.

If you’re keen enough to cycle throughout this part of Carnia you’ll find that there’s a good chance that it will rain just about every second day, even in summer. You’ll also discover that you’ll be either be riding uphill or down. There’s not a lot in between. 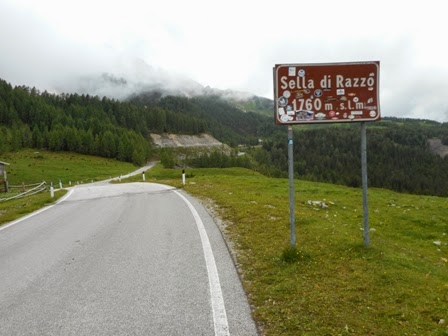 Still as bleak as a Charles Dickens’ novel, I went into a small café for a cappuccino that soon became two. Roz and I both enjoy Italian coffee. We agree that it’s the closest thing to Australian coffee that we’ve yet encountered in Europe. The only problem is it’s served in about half the size of an Australian cup. It has left us thinking that lengthy conversations over a coffee in Italy must be an expensive pastime.

Still raining and decidedly colder, I realised that at some stage I had to get moving. After apologising to the café waitress for having left a trail of water from the front door to my table, I uncomfortably squelched my way back out into the street.

I continued travelling along the 465, which follows the Pesarina River Valley steadily uphill until it launches towards the Forcella Lavardêt and beyond it the Sella di Razzo. The road up, heavily forested and remote, I could only imagine how much more beautiful it would have been but for a few rays of sunshine. Well after mid-day, none seemed forthcoming.

Riding for a short time along flat open road at the top of the pass, I soon heard the unmistakable reverberation of motorbike engines coming from the opposite direction. While motorbike riders are somewhat disturbing when a bunch of them tear past you from behind, especially from the inside of a long tunnel, it was at least an alternative to the unremitting sound of rain that I’d been subjected to all morning. Friendly, now standing on two legs and taking off their gloves and helmet, they stopped at the top of the pass for a quick chat. Four guys from Frankfurt Germany, they were on their way home after travelling for a few days through the Dolomites. Nothing surprising, they were just another group of the many - mostly German – motorcyclists who, like jackhammers, break the silence along some of the most peaceful roads.


Descending from the top of the Passo della Mauria, I soon reached the SS51 road which led me towards our two-night-stay at San Vito di Cadore. Late afternoon, the rain had finally ceased and the remaining 60 kilometres, through the picturesque Boite River Valley, travelled quickly. Along the road I passed more villages with their names ending in ‘Cadore’ than there are ‘Brightons’ on the Sandringham train line back home in Melbourne. But they at least had personality; each of their names – Pieve di Cadore, Tai di Cadore, Valle di Cadore, Vodo di Cadore, Borca di Cadore and no less, San Vito di Cadore – sound a little more vibrant than the fairly lacklustre alternatives of ‘Beach’, ‘Middle’ and ‘North’, afforded their Australian counterparts.

Arriving in San Vito around 6pm, cold, wet and hungry, I was looking forward to dinner, as well as meeting up with our Australian friend Eric who had been visiting his native Germany before cycling through parts of Europe. Aged 72 and amusingly self-effacing – often referring to himself as a ‘fat German’ who just happens to climb high mountain passes on his pushbike – we were going to climb the very formidable, Tre Cime di Lavaredo, the next day. Not to be outdone, Roz herself was going to walk up six of its eight kilometres to the top, before returning down the same way.
Some might say, ‘Why not just take the car!’

But if you’re fortunate enough to be able, the slower you travel, whether by foot or on a bicycle, the more you can see and feel. Sometimes, it’s just so much better to feel the cool air on your face rather than the air con from inside a car.