While a relatively short distance between San Vito di Cadore and Pozza di Fassa, it was impossible to visit Northern Italy for the third time without riding the Sellaronda, a plateau-shaped massif in the Dolomites. A popular ski circuit during winter, crossing the Campolongo, Pordoi, Sella and Gardena passes, it has become just as fashionable for cars, motorbike riders and cyclists alike, to complete the 50-kilometre route.


Leaving San Vito in a veil of grey I was soon climbing out of Cortina d’Ampezzo, towards my first pass for the day, the Passo di Falzarego. An alternative route to another famous Italian pass, Passo Giau, it was first crossed by the Giro’d’Italia in 1946. However in recent years, since the Tour’s fervent desire for steeper climbs, it has lost favour with Tour organisers.

The area between both passes was once the theatre of brutal and bitter fighting between Italian and Austro-Hungarian troops during World War I. Scattered around the area are open-air war museums, such as the strikingly prominent Cinque Torri, a group of five towers which give the mountain its name. Each museum retains evidence of not only the fighting that occurred, as well as the structures that were built by the Italian army to support its defence of the frontline. Another significant gallery is the Lagazuoi Tunnels, which house a collection of preserved store rooms, soldiers’ barracks and passageways, used by Italian troops in their attempt to blow up the enemy. It’s rather ironic however, that more soldiers tragically lost their lives through ice and snowstorms in these parts, than were killed by enemy bullets.


Once over the Passo di Falzarego’s 2,105 metre summit, the road suddenly became less friendly. Constant views of lush pine forest and the Dolomites above became temporarily replaced by steep switchbacks and a tight corner tunnel that even a procession of speeding Porsches had to negotiate cautiously. Eventually however, like most descents, the road behaved more predictably, swiftly conveying me to Arabba, which stands at the foot of the Sella group of mountains.


Normally ridden on event days in an anticlockwise direction, and beginning with the Passo Gardena, our accommodation at Pozza di Fassa made it more practical to start at the foot of the Campolongo climb. While hovering above 9% for one-and-a-half kilometres, I soon found myself rolling over its 1,875 metre summit. A bit like Arthurs Seat back home on the Mornington Peninsula, it’s not much more than a 15-minute climb with an average gradient of 7.4%.
﻿

Like a circular scenic railway, the Sellaronda travels up and down elegant mountains and beautifully green valleys, all the way to Canazei en-route to Arabba, or as in my case towards Pozza di Fassa. 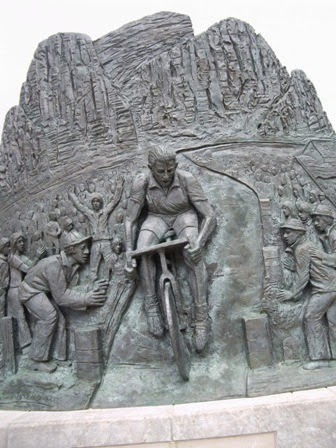 Of the four, Passo Pordoi, a perfect alliteration with a near-perfect setting, was the one I looked forward to climbing most of all. Not only was it Marco Pantani’s training ground but it bears a tribute to Fausto Coppi, another Italian cycling legend who made the pass his own. Sadly, both cyclists died in tragic circumstances, Pantani, through cocaine poisoning at the age of 34 and Coppi, from Malaria, aged 40.


Though an easier climb than others in the region, its 28 hairpin bends, Alpine pastures, stunning views and a sense of history at its summit, make Pordoi a must-do climb for any cyclist – or other adventurer - passing this way.

Left: the memorial to legendary Italian cyclist, Fausto Coppi, who was five-times champion of the Giro d'Italia.


While only a kilometre ride from Canazei to our overnight accommodation at Hotel Villa Margherita, the road, the SS48 through the Val di Fassa was surprisingly busy. As a result of an unexpected shower, the road was wet and cars were suddenly skating past me much faster than they had all day. I guess I’d been spoiled by the virtually uninterrupted panorama and peaceful roads since I’d left San Vito di Cadore some eight hours earlier. Though wet through and happy to have arrived at our hotel, I had a lot to be thankful for. I’d witnessed some stunning vistas over five new passes, and I’d learned more about the people and the local history along the way.