Leaving the lively ski-resort-town of Cortina d’Ampesso, along the SR48, you get two climbs for the price of one. First, there’s the Passo Tre Croci, a moderately steep climb of just over eight kilometres with an average gradient of 7.1%. More of an appetiser to a rich meal that later gives you indigestion, the road heads downhill from the 1,809 metre summit before gradually regaining some height on its way towards Lake Musurina.


The lake effectively marks the starting point of the short climb up the Tre Cime di Lavaredo. Though brief in duration, it’s nevertheless something of a horror movie with a perverse sort of ending. Maxing out at 19%, its average gradient over the final four kilometres is 12%. Intimidating after riding 19 kilometres, like I had; demoralising if it’s the climax of an exhausting 200-kilometre-plus ride.

While now a fabled climb with a near 50-year history in the Giro d’Italia, the Tre Cime di Lavaredo’s introduction to the Italian Tour was tainted with controversy. First climbed, in woeful conditions in 1967, race organiser Vincenzo Torriani declared the stage 19 race null and void, after riders collectively grabbed onto team cars or were pushed by spectators all the way to the top at the Rifugio Auronzo.
﻿ 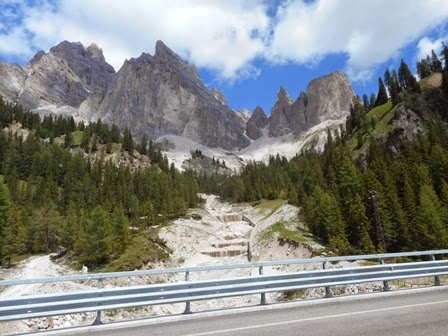 Ironically, given the sport’s drug-addled history, the climb’s inclusion the following year led to speculation that riders would be even more tempted to venture outside the rules. Meanwhile, rather than promote the 213-kilometre stage 12 race from Gorizia to the top of the Tre Cime di Lavaredo, the local media urged spectators to restrain their roadside behaviour. As a precaution, police lined the sides of the roads leading up to the summit.

Despite the heavy rain that had turned to snow by the time the stage reached the Dolomites, the race did not reach the calamitous proportions of the year before; certainly not for young Belgian rider, Eddy Merckx, who from the bottom of the climb launched himself to soon become cycling’s greatest-ever rider.


We enjoyed a light lunch near the banks of the lake – a luxury Eddy Merckx himself couldn’t afford – before heading off up the mountain. Of the three summits, which before 1919 marked the border between Austria and Italy, only two are visible along the steep valley road.

But for half-a-kilometre around 12%, the first four kilometres of the climb are not much harder than riding along a flat road. The problem is, it doesn’t take too long to ride four kilometres along near-flat road; as I soon discovered with my legs feeling like jelly and my lungs heaving for air. I don’t remember much more of the climb, only how I hovered between six and eight-kilometres per hour for most of the way, and that when I had the energy to look up, the views were spellbinding. 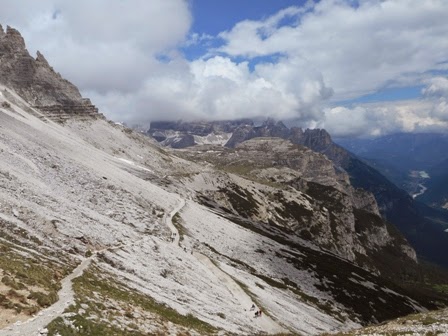 Standing in the car-park above the Rifugio Auronzo, I soon caught sight of our friend Eric, who at 72 didn’t take much longer to reach the top than I did. Suddenly, Roz appeared not more than a few minutes later, having walked up six kilometres along the road. “You were quick” I said, surprised to see her so soon. It didn’t long for the penny to drop; I hadn’t ridden much faster than walking pace.

You might be seated on a bicycle but struggling up a mountain, theoretically speaking, keeps your feet on the ground. As difficult as it can be, I never, ever, lose sight of the natural beauty that engulfs me along the way. Like everybody, I’m just a traveller in time, for such a short while, but what a gift nature has lent me – all of us.
Books by Mark Krieger: