Today I reached a busier part of Slovenia I hadn’t yet seen. I knew there had to be heavy traffic and impatient motorists hidden somewhere and they didn’t let me down; but more of that later. 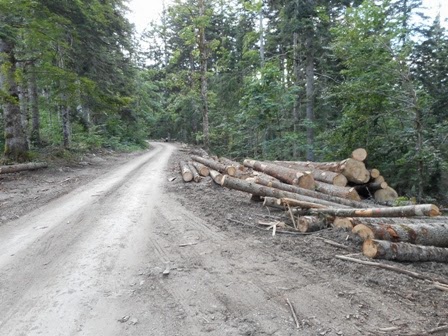 Determined to take the road less travelled, I began the day by retracing my steps back along the 212 before turning right and heading towards Pudob, a tiny village located in the tranquil Lož valley. Riding in warm sunshine along a flat, open road, I thought to myself, ‘My cycling life couldn’t get much better than this’. Just fifteen minutes and five kilometres later I was in cycling hell.

While my map indicated I was heading towards higher ground, the squiggly yellow line that I’d been following gave no indication that the smooth bitumen I’d been skating along would turn to rubble. Convinced the road would soon return to its former self, I pressed on. Needless to say, for the next two and a half hours I was travelling uphill along gravel road at around eight kilometres per hour. How I never got a puncture I’ll never know, but it gave me some insight into what the real Tour riders of yesteryear had to endure when climbing Hors Category mountains along gravel roads; and they didn’t have the plethora of gears to fall back on like we have today. 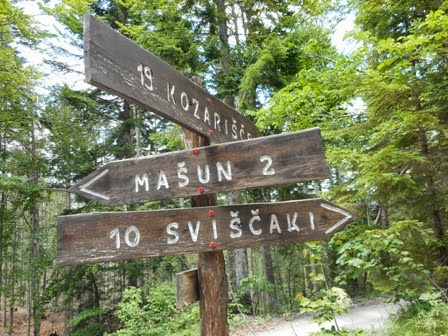 Half denuded by ice over the winter months, the forest was covered in fallen trees, many stacked along the road waiting their removal by truck. Passing two loggers, who were obviously having a smoko break, I contemplated stopping to ask if and when the road became bitumen again. But sometimes it’s just better not to know. Covered in sweat and having already ridden more than 10 kilometres, I couldn’t bear the thought of turning back. What’s more, I still had at least another 90 kilometres to travel once I finally reached a bitumen road that I could actually travel along.

And finally I did; at the very remote and peaceful settlement of Mašun. My map told me that I was still travelling along the same squiggly yellow line that I’d been following since early morning but Mašun had something going through it that is music to a road-biker’s ears; a downhill bitumen road. At this stage, I couldn’t have cared if I had to continue climbing, just so long as I had a smooth tarmac out in front of me. But just as a road can become your enemy, so too can it be your friend; as it was for the next 13 kilometres of free-wheeling ease into Knežak. Like a metronome, my yin and yang of cycling had tilted back my way.

Somewhat cautiously, I gradually headed towards the A1 motorway and the secondary road, 111, which in tandem convey traffic back and forth along the Adriatic Coast. Hardly surprising, especially being a long weekend, both roads were flooded with fast-moving traffic, heading towards Koper, Piran and Portorož, along Slovenia’s 46 kilometre coastline. For the second time in the one day, I was forced to cover a relatively short distance in more than twice the amount of time it should normally have taken. After a combination of riding along traffic-laden roads and difficult-to-find cycling paths – all the time getting on and off the bike to ask for directions – I finally rolled into the busy main road of Portorož around 7 pm. It had been a very long and convoluted day’s ride but I only had to cast my eyes towards the water and the colourful umbrellas along the sand to realise why the roads were teeming with traffic.

Wedged in between the Italian and Croatian borders, Portorož and its charming neighbours Koper, Izola and Piran are collectively one of Slovenia’s most popular tourist destinations. Piran, which is often referred to as the miniature version of Venice, is by far the sentimental favourite. Situated at the tip of a narrow peninsula, it’s renowned for its beautiful harbour, enticing seafood restaurants and its Venetian alleyways.

By the end of our first evening we’d fallen in love with the place. Reluctant to leave after the end of the second, we swore we’d come back.
Books by Mark Krieger:

“The bicycle, the bicycle surely, should always be the vehicle of novelists and poets.”
US author Christopher Morley