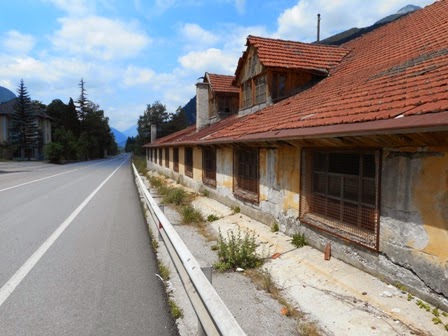 Only seven kilometres to the border, I was soon passing through the alluring Italian town of Tarvisio. Nestled in the Canal Valley (Val Canale), between the Carnic Alps and the Karawanks ranges to the north and the Julian Alps to the south, it is one of a trifecta of towns – Kranjska Gora and Arnoldstein being the other two - that share the borders between Italy, Slovenia and Austria.

Like a woven piece of cloth, the secondary road I was travelling along, the E55 motorway, the River Fella, and the now disused railway line - criss-cross each other along the same route, almost all the way to Tolmezzo. Despite the blustery headwind, the gently downhill valley carriageway provided a leisurely introduction to the two weeks of Italian roads ahead of me. Hardly needing to look at my map and with most of the traffic preferring the faster motorway, I could afford to relax and just enjoy my surroundings. All that was needed was to effortlessly turn the pedals.

Roz and I met for lunch at the quiet village of Chiusaforte. Once the railway station and proudly wearing its moniker on the awning out the front, the historic building we lunched in had been imaginatively refurbished into a small eatery. We were informed by our very neighbourly hosts that the railway line through the valley had ceased operating in 1995 and eventually replaced with a bicycle footpath. Entering the ‘station’ for the first time, with its bitumen cycle track extending into the distance, you’d be forgiven for thinking that nothing had changed. You half-expected a train to pull in to the station at any minute.


Following lunch and an enlightening lesson in local Italian history – thanks to the plethora of black and white photographs adorned on the station’s walls – I continued my day’s journey towards our accommodation at Arta Terme, less than 40 kilometres away. A leisurely two-hour-ride along a quiet road that conveniently skirted the relatively large town of Tolmezzo, it was a perfect end to my cycling day. I even found our accommodation with ease; our charming hotel proprietor, Christina, from B@B Profum di Bosc waiting out the front to greet me. (I think Roz might have informed her that a 59-year-old relic was arriving by bicycle from Slovenia!)

Tomorrow, of course, would be another day; Monte Zoncolan beckoned. I could hear my mate Lore’s words reverberating in my ears: “But you know there’s three ways up Zoncolan”. Unfortunately, I did!

“Racing machines, the cyclist is a man half made of flesh and half of steel, that only our century of science and iron could have spawned.”