Today was to be our last full day in Slovenia before crossing the border into Northern Italy. It was with mixed emotions that I headed off towards Kranjska Gora, approximately 120 kilometres to the north. I’d been looking forward to crossing Vršič Pass for a second time, via Bovec and the beautiful Soča Valley that I’d heard so much about. But Roz and I were sorry to be leaving such a beautiful country that we’d embraced with mind and heart.
﻿
﻿The road, rail and river, follow the same gently uphill route from Nova Gorica to Kozmerice, a tiny settlement on the bank of the Soča River. Just seven kilometres further on is Tolmin, the largest settlement in the Upper Soča Valley, with a population of just under 4,000. Quietly remote in comparison to the busy Adriatic Coast, the traffic seemed to slip by virtually unnoticed; and perhaps being close to the Italian border, there were far more cyclists out on the road today than I’d seen over my thousand-kilometre-journey so far.
﻿
Still following the river gently uphill for another 16 kilometres, I reached Kobarid, another small Slovenian town with a history of bloody warfare and foreign occupation. During World War I, it became a theatre of battles fought between Italy and Austria-Hungary. Virtually destroyed between 1915 and 1917, it was occupied by the Italian Army at the end of the war and just two years later, annexed to Italy. The town is also known for the Battle of Caporetto, where the Italian retreat was documented by Ernest Hemingway in his novel A Farewell to Arms.

From Kobarid, the road veers right and uphill into the cauldron of the Polovnik Mountains, the western foothills of the Julian Alps. But only a taste of things to come, the climb didn’t seem to last much longer than two climbs up Arthurs Seat, and before long I was back on lower ground and enjoying a brief lunch with Roz.

The 33-kilometre ride from Bovec to the top of Vršič Pass can be divided into two halves; a pleasant moderate uphill ride along the beautiful emerald-green Soča River, culminating in a near-two-hour ladder of pain that makes you work for every metre gained towards the summit.
﻿
﻿Following the waterway earlier on reminded me of the spectacular views you get in the French Alps, particularly the quiet carriageway known as the Combe du Queyras that accompanies the Guil River before it veers left on its way up to the Col d’Izoard. But there was little room for reminiscences the moment I reached the village of Trenta, the official starting point to the ride up the pass. An almost 12-kilometre climb at 8.4%, the Vršič Pass is a more difficult proposition than from Kranjska Gora, especially with the additional 20 kilometres you gradually climb from Bovec. Whether it was the lateness of the day or just the persistent gradient, perhaps both, it became a slow and laborious slog, with the only respite being the few metres of flatter road around each of its 20-plus hairpins. It felt like the closer I got to the summit the steeper the gradient became, a parting reminder that though not as high as some of the road passes in the Grand Tour countries of Italy and France, it’s every bit as steep, if not steeper, than most. 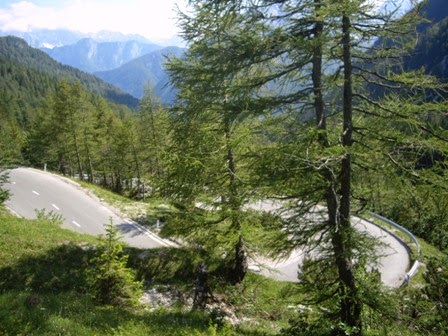 Having already descended the pass two weeks earlier following my ascent from Kranjska Gora, I wasn’t looking forward to the descent. While relatively short, it was incredibly steep and dangerous, particularly around each of its many cobblestone switchbacks. Following one of the slowest bicycle descents known to mankind, it was just a matter of moments before I was ensconced in the centre of town at our overnight accommodation at Vila Tatjana.
﻿
We decided to eat dinner that evening, our last in Slovenia, at the charming village of Rateče, where we spent our first two nights. Only seven kilometres from Kranjska Gora, it seemed an appropriate place to celebrate what had been a wonderful experience. Besides, the restaurant we were returning to, Gostilna "Mojmir" Kopavnik Janez s.p, had a lovely host, served great meals, and at a very affordable price.

Of all things, the soup won us over in an instant. Whatever the choice, it was the way it was served; in a Cob loaf. Thoroughly enjoying such a simple meal was a hearty reminder of the food, the people and the places (not to mention most of the roads) that made our journey around the country simply fascinating.