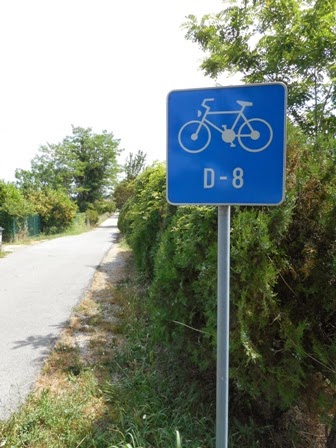 Without the D8 cycling route my 20-kilometre ride from Portorož to Koper would have been a living hell. A meandering maze of narrow bitumen trails, it was far slower that the 111, nevertheless it provided me with safe passage from what is probably Slovenia’s most frenetic section of road.


Once leaving the Adriatic Coast behind, the roads became less chaotic and far more bike-friendly. On my gradual climb inland, from Dekani towards Kozina, many more cyclists began to appear along the road. It left me thinking; it’s only when you have no cars to worry about that you can truly allow the freedom of movement on a bicycle to take over. Only then can you absorb the transformation that surrounds you and allow your mind to wander in numerous directions. 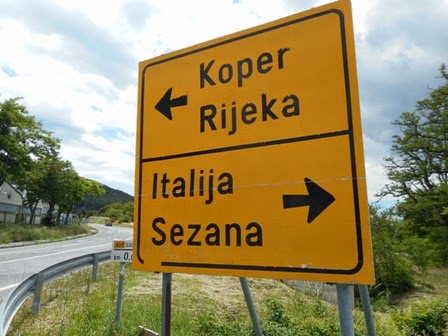 Only a 60-kilometre ride, along the 204, from Kozina to our accommodation in Nova Gorica, my thoughts started to turn towards Italy. While I still had to cross Slovenia’s Vršič Pass from its more difficult southern side, the immense land mass to the northwest looked far more intimidating. To date, 1611 metres with an 8.5 % average gradient was as high and as hard as I’d climbed. Soon I’d be riding over some of the high passes in the Italian Dolomites. It seemed a daunting proposition, especially after viewing the recent television coverage of the Giro d’Italia’s slog in driving rain and freezing cold over Passos Gavia and Stelvio.
﻿﻿﻿
But for now I was riding along a secondary road, at best flat and straight, at worst mildly undulating. Other than a few passing cars my only company was the train line that follows the 204 towards the university town of Nova Gorica, before branching off into Italy or further north towards Slovenia’s border with Austria. Train lines are a good cycling companion, particularly the ones that stay true to the road you’re on; as mine did, and in no time at all I’d arrived at our accommodation at Guest House Šterk, a lazy four kilometres from the town’s centre. ﻿﻿﻿