On another bright and cheerful morning in Slovenia - albeit a late one, I continued my cycling journey by hugging the Croatian border, along the 219 road to Brežice. I’d planned to meet up with Roz for lunch in a Croatian border-town somewhere along the route but as in life, things don’t always go to plan.


Blithely heading towards a Croatian village called Kumrovec, I was greeted by two stern-looking uniformed gentlemen who demanded they see my passport. Naively assuming I had all bases covered, I fumbled around in my plethora of plastic bags to retrieve the important item; or at least my photocopied papier-mâché version. Shaking his head and pointing a finger in the direction I’d just come from, the senior officer I presume, for he distinctly looked the grumpier of the two men, made it quite clear that I would not be lunching on Croatian soil. Not on his watch anyway. With not a word of Croat in my repertoire and nothing forthcoming from him, except for his raised finger which was pointing more assertively than it was 60 seconds earlier, there was nothing left to do but turn and ride. Feeling relief but somewhat bemused by the situation – especially considering there was nothing to greet me at the Hungarian border other than a few signs and what looked like a disused carport – I headed back to the far friendlier Slovenian road I’d just arrived from.


Crossing the Sava River, after a light Slovenian lunch – one that was served with a smile - I proceeded along the 419 road towards our two-night stay at Novo Mesto. A beautiful ride for the majority of its length, the quiet secondary road straddles the Krka River gently downstream for much of the way.

With essentially just two roads to follow all day, there were few opportunities to take a wrong turn and end up in some out-of-the way place. Other than my one-way conversation with the Croatian guards on Border Security, my only concern for the day was finding our accommodation in Novo Mesto itself. Experience tells me that given 24 hours, the town you’re staying at becomes a much friendlier place and certainly easier to navigate around. By the time you’re about to leave, you feel quite at home and wish you could have stayed for longer.


However, finding your hotel, auberge or hostel for the first time can be like searching for a needle in a haystack. Novo Mesto became one of those places. After spending a frustrating hour circling the town, repeatedly asking for directions and finally, tiredly wheeling my bicycle up and down cobbled roads, I eventually sighted Roz outside our delightfully reconstructed accommodation at Hostel Situla. Redeveloped from an 18th-century townhouse, the hostel resides in the centre of Novo Mesto’s Old Town, a place full of history and culture if you’ve got the inclination, and legs, to navigate your way around. 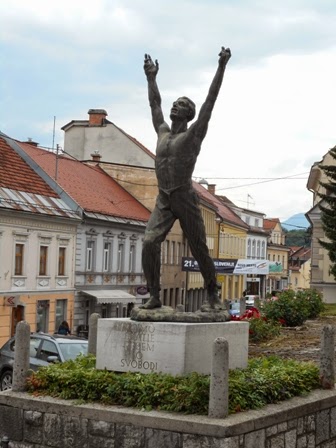 Novo Mesto was already one of the most important European cultural centres by the 8th century BC. It later became an important Roman transport route connecting Emona (Ljubljana) in the north and Siscia (or what is today called ‘Sisak’, in Croatia) to the south. Like many places in Slovenia, both World Wars, and the war for Slovenian independence, took its toll on the town and its population. In the town’s streets are two statues, one of a man with raised hands celebrating freedom, and another, of a prisoner tortured by pain and suffering. In the 21st century however, things have changed much for the better.

Today, Novo Mesto is not only the site of thriving car manufacturing and pharmaceutical industries, but it finds itself becoming a popular tourist destination. Over a nice Slovenian rosé wine, from one of the country’s renowned wine-growing regions, Roz and I were happy to drink to that.

“After your first day of cycling one dream is inevitable. A memory of motion  lingers in the muscles  of your legs, and round and round they seem to go.”