Today was a day I was looking forward to; reacquainting myself with bitumen roads, and Austrian ones at that. Initially following the Drava River, which continues it long journey into Croatia, I crossed into Austria via the Radipass (669 metres). A rather innocuous climb on the Slovenian side it afforded me a steep descent - as much as 18% in parts – all the way to Eibiswald. 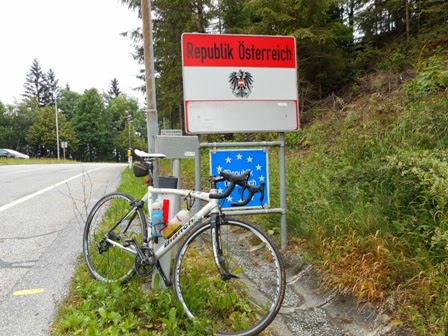 Here I picked up Route 69, a long and flat, quiet and beautifully scenic stretch of road that takes you all the way back to the Slovenian border 70 kilometres to the east. An Austria I’d never experienced before - essentially only ever having ridden though the Alps - it felt like riding on one of those airport travelators where you’re carried along with virtually no effort at all.


More than satisfied, I left Austria at the lively town of Bad Radkersburg. Though I didn’t hang about much longer than it takes to ponder what the ‘Bad’ stands for, it gave me the clear impression that it would be an interesting place to stay. Bearing a distinct medieval flavour, it features the proverbial castle, surrounded by 13th century walls and towers. Also a thermal spa town, with a population of less than two thousand, it supposedly receives more sunshine than any other part of the country. Having suffered from the intense cold, even at the height of summer, during a previous visit to Austria, that’s all the information I needed to add it to my bucket list.


By comparison, Gornja Radgona, its twin city across the river Mur, seemed notably less glamorous and somewhat dreary, perhaps a lasting legacy of the disintegration of the Yugoslavian republic and the border fighting that went with it.

Still riding along flat terrain it took little time to reach our overnight accommodation at Martanci, a tiny village on the outskirts of the region’s capital, Murska Sobota. Once a Hungarian market town, the city has definitely kicked on since the early 20th century, while still maintaining its traditional past.


While the region, known as ‘Prekmurje’, seems somewhat less captivating than the Slovenia we’ve seen so far, its roads are peaceful, very navigable and as flat as Australia’s Nullarbor Plain.

While still a long way from the pain of the Italian Alps, I’ll take it while I can.