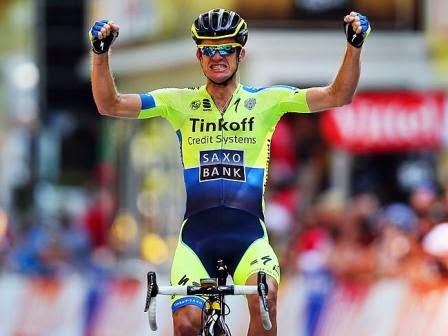 Since Richie Porte’s fall from grace in Stage 13 of this year’s Tour de France, there hasn’t been much for us Australians to get excited about. That was until Michael Rogers’ wonderful win in Tuesday’s stage from Carcassonne to Bagneres-de-Luchon.


Rogers’ triumph is on the back of his two stage wins in this year’s Giro d’Italia, the most meritorious being his runaway victory in the Queen Stage of the race, up Monte Zoncolan. A deserving winner after a number of setbacks, including breaking his collarbone on a descent during Stage 8 of the 2007 Tour de France, contracting glandular fever which caused a hiatus in his career and in more recent times, suspended from cycling for testing positive to clenbuterol – a charge that was five months later overturned by the Union Cycliste Internationale – he has almost singlehandedly carried the Team Tinkoff-Saxo since Alberto Contador’s demise.

While it has taken the 34-year-old 10 French Tours to achieve his first stage win, Rogers has been a magnificent team player throughout his career, which is one of the main reasons for his popularity. In his first Tour de France, in 2003, he was the last rider remaining to help French cyclist Richard Virenque win the stage seven race from Lyon to Morzine, along with his sixth Polka dot jersey as king of the Mountains.


A dependable servant to each of his professional cycling teams since 2001, Rogers also played a key role for Team Sky key in Bradley Wiggins’ and Chris Froome’s 1-2 finish in 2012. A veritable draught horse, maintaining the tempo in gruelling mountain stages, he has finally, and deservedly, had some personal success as a member Team Tinkoff-Saxo. I’m sure many bleary-eyed Australians, watching tonight’s final mountain stage in the Pyrenees hopes there’s even more to come.
Posted by markkrieger at 11:38