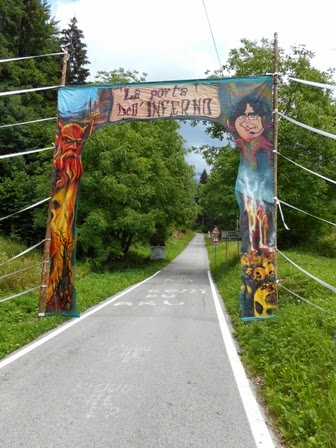 While I’d climbed Monte Zoncolan before – twice from Ovaro, the popular route used in the Giro d’Italia, and once from Sutrio – I never really thought much about its most difficult, yet least known route. It’s the narrow road up from the tiny hamlet of Priola, which is in the autonomous region of Friuli-Venezia Giulia. I guess a climb with an average gradient of 13% isn’t something you want to do too much thinking about.

But there’s something about Monte Zoncolan that draws me to it. (Roz herself always looks forward to walking up the final three kilometres to the summit, having done it on no less than four occasions, primarily from the Ovaro side). As for me, it’s something about the mountain’s unremarkable summit, the narrowness of the road, as well as the almost guaranteed solitude of the climb. Even during the height of summer, you’d be lucky to pass or be passed by more than two or three other cyclists.

The ride up the mountain from Priola reminded me of climbing Spain’s Alto del Angliru from Santa Eulalia. While the Spanish road is nowhere near as steep – it is precariously narrow and surrounded by dense forest, engendering a feeling of isolation and claustrophobia. They’re both the kind of roads you’re unlikely to see another cyclist on; and in each case, I didn’t. 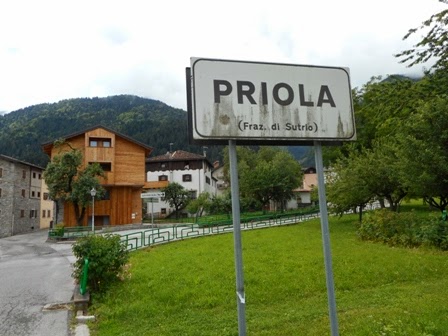 After meeting Roz at the top of the climb, I headed down towards Ovaro, to begin my second ascent up the mountain. I never dreamt I’d be climbing Monte Zoncolan from its ‘second-hardest’ side, especially considering its 11.9% average gradient. Slightly longer than from Priola, it was just as excruciatingly difficult, no less than the three kilometres of 15% average-gradient in the middle of the climb. A paltry distraction from the lactic acid build-up in my aching legs was the smorgasbord of Giro d’Italia graffiti along the road, including a recurring inscription of ‘Crikey Cadel’, which probably encapsulated the disappointment we Australians felt for our champion rider not winning a Grand Tour just one more time. 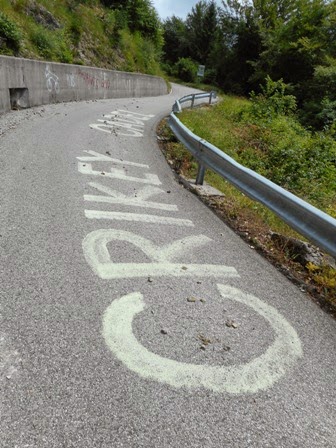 Having reached the summit for a second time I didn’t even stop to catch my breath, before heading down the other side towards Sutrio. Near-perfect riding conditions, the weather was cool and there wasn’t a breath of wind; just the drooping grey overcoat hovering above.

After a brief coffee in Sutrio, I headed up the Monte Zoncolan-bound road for the third time. The route from Sutrio is by far the easiest, especially the first 11 kilometres, but the last three are an absolute nightmare. Once converging with the road from Priola, the average gradient hovers above 13%, while maxing out at 22%. The weather deteriorating by the minute, the sky became smashing cymbals. Unnerved by the thunder, lightning and heavy rain, which seemed to coincide with my meeting of the two roads, I was anxious to reach the summit for the last time and head back down the mountain.﻿﻿

Though still hours before nightfall the sky had turned dark and the road down had become a raging torrent. The steady stream in front of me, coupled with the steep descent made braking virtually ineffectual. Saturated, bitterly cold and humiliated to a certain extent, my only option was to dismount and walk my bicycle down towards the near-bottom of the mountain where the steep descent eased off a little. It seemed an eternity before I reached our accommodation at Arta Terme.
One of the grand things about ‘struggling’ up mountains is that you remember the experience of reaching the top, and how glad you felt to have made it. The pain disappears, virtually forgotten. Until your next climb of course!