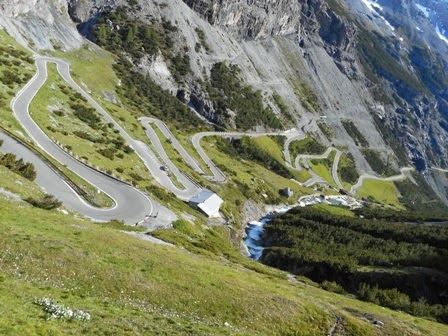 A beautiful day emerged after the heavy rain the day before. Melancholia had been reduced to the cutting room floor, replaced by another magnificent re-run of The Sound of Music. With powdery snow still clinging to even the lower peaks, the high ‘hills’ above, were undeniably alive.

Perhaps not the most difficult climb in Europe but arguably the most exhilarating, the Passo dello Stelvio is an iconic Italian landmark. But long before cycling, let alone the Giro d’ Italia, the original road belonged to the Habsburg Empire. Officially opened in 1825, after taking five years to complete, the road crossing was designed to connect the former Austrian province of Lombardia with its Empire to the north. The man responsible for its creation and execution was Carlo Donegani, who in return, was awarded the title of Knight of the Austrian Empire and the arbitrary Nobleman of the Stelvio by the then Emperor Ferdinand – albeit 12 years later.

Before the end of World War I, the top of the pass formed the border between the Austro-Hungarian Empire and the Italian Kingdom. Like other significant ranges, such as the Dolomites and Monte Grappa, the area became a theatre for war, where fierce battles were fought in ice and snow. It wasn’t until Italy’s accession of the region after 1919, that the pass lost its strategic importance. Over the majority of years since however, humans have embarked on more playful pursuits that pay homage to Donegani’s writhing asphalt serpent. 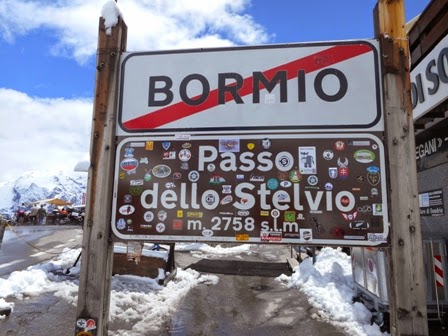 France’s legendary climb, Mont Ventoux (from Bedoin) and Italy’s Stelvio (from Bormio) have two fundamental characteristics in common; they are of

a similar distance and have an almost identical average gradient. But that’s where the similarities begin and end. Unlike Ventoux’s virtually lacet less ascent, Stelvio’s 37 hairpins from its southern side, and a staggering 48 on its north, make it a climbing cyclist’s paradise.


The first few kilometres of each side of Stelvio are remarkably similar; not overly steep and offering a brief respite of just above 4% about a quarter of the way into the climb. Though not to be taken for granted, neither lasts for long and if riding from Ponte di Stelvio, on the pass’s north side, that’s all you are going to get.

A perfect day for riding in the mountains, I found the first half of the climb from Bormio to be relatively easy. Mind you, I was probably only travelling at around 10 kilometres per hour and had more perspiration pouring from my forehead than the rivulets coming down the road from the melting snow above.

A combination of tunnels and gallerias mark the most difficult part of the climb, a short stretch of around 14%, made worse – or better if that’s your bent – by the elongated view of the innumerable number of switchbacks wriggling all the way up to the top of the pass.

The green grassy slopes now a sea of white I became startled by what sounded like a heavy vehicle’s engine reverberating on my heels. Still moving no quicker than my paltry 10 kilometres per hour, I couldn’t help but wonder why the driver was content to sit so close behind me. Perhaps it was a bit like Armstrong’s ‘sporting’ gesture on the climb up Ventoux in the 2000 Tour, when he purposely let Pantani have his day. In any case I wasn’t buying it, certainly after realising once around the next switchback, that my menacing pursuant was nothing more than the sound of running water catapulting over the edge of a high rock wall above. 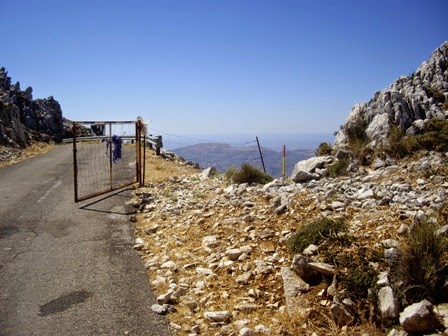 Eventually, the blanket of snow became thicker and more prominent with each turn of the pedal, signalling my closeness to the summit; but not before climbing the last three kilometres which hovered between eight and twelve percent. A little over two hours since I’d left Bormio, it was a great feeling to have reached the top. Having driven up the mountain with Roz two days earlier, I was prepared for the carnival-like atmosphere that cashes in on the pass’s popularity. Like a market place, there are a plethora of stalls selling memorabilia, bars selling food and drinks, and stands selling hot dogs and bratwurst sausages, all at exorbitant prices.


Given its history and iconic status it’s fait accompli that Stelvio has become a commercial enterprise, a bit like other fabled mountains and passes such as Alpe d’Huez, Mont Ventoux and the Col du Tourmalet. I guess that’s the price one pays for popularity but give me the solitude of the top of Monte Zoncolan, Spain’s Alto del Angliru and Sierra de la Pandera any day. Sometimes it’s nice, at least for a moment in time, to have the summit all to oneself.


If the climb up the Passo della Stelvio from Bormio is a breathtaking experience, then the ascent up its opposite side, from Ponte di Stelvio, is out of this world. Snow-capped, dangerous and wonderfully unique, I’ve not seen anything quite like it. But it’s not until you reach the small village of Gomagoi, some 17 kilometres from the summit, that the climb truly begins. Here the road becomes steadily steeper, slowly coiling its way up the valley through luxuriant pine forest.

If Gomagoi represents the beginning of the real road climb up Stelvio, then Trafoi is the window to its magnificent beauty. Soon out of the forest, the route ahead is laid out in front of you. Frightening, yet awe-inspiring at the same time, there’s nothing left to do but follow the lacets, that like white-coloured rice terraces, gradually wend their way towards the Tibetan hut perched on the summit.

Like Ventoux’s magnificent moonscape that accompanies you towards its antenna-studded-summit, the view of Stelvio’s asphalt serpent above me is something I’ll never forget. Was it worth coming all the way to Italy for; you betcha! A hard-won gain, no matter how seemingly trivial, these are the moments we cherish.
Posted by markkrieger at 23:52