Cycling in Italy: Bormio to Temu via Passo Gavia (50kms)

﻿
To label Passo di Gavia as Stelvio’s little brother would be a gross understatement. Not quite as high, nor renowned for its hairpins, it’s nevertheless every bit as dangerous and exigent as its close neighbour up the road. Prone to the extremes of bad weather and still permanently covered in snow in early June, it has been centre stage to some of the most dramatic events in the Giro d’ Italia’s history.


First introduced in 1960, the pass has made seven appearances in the Italian Tour, the last just months ago, when Movistar rider Nairo Quintana won the stage 16 race over the twin passes, Gavia and Stelvio, amid freezing temperatures and falling snow. As horrendous as this year’s conditions were, the route was at least able to have been used; unlike 1984, 1989 and then again, in 2013, when it had to be re-routed due to bad weather. In last year’s stage 19 race, riders instead had to head east from Ponte di Legno, over a new 160-kilometre route that included the lower-altitude climbs of the Passo del Tonale (1,883m) and Passo Castrin (1,706m). 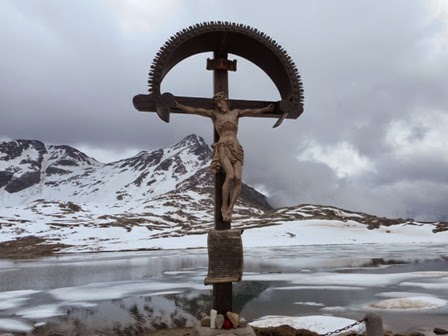 Nevertheless, Passo di Gavia in more favourable conditions is a spectacular ride. An easier climb from Bormio – which I didn’t experience first-hand until a few days later – it travels over almost 26 kilometres at an average gradient of 5.5%. Apart from a kilometre averaging 9%, its first 12 kilometres, where it cautiously wends its way up the valley until it reaches the ski resort town of Santa Caterina Valfurva, is as easy as a category 1 climb can get. Even from here, the steepness of the road doesn’t reach above 11% and hovers between 7 and 8% for most of its way to the summit.

But starting at more than 1,200 metres it doesn’t take long for the cold air and wind to bite; and bite it does, especially once you reach the pass’s exposed slopes. With just four kilometres remaining, the steepness of the road disappears, affording the rider the opportunity – providing they’re not besieged by blinding hail – to soak up the most stunning views imaginable.

On reaching the top of Gavia’s 2,621 metre summit, Roz - who had as usual, walked up part of the way - met me for lunch inside the very warm and secure Rifugio Bonetta. Overlooking the Lago Bianco, or White Lake, encircled by the colossal Corno dei Tre Signori precipice above, it no doubt receives plenty of visitors. The warmth of a fire and two bowls of hearty soup made leaving difficult, especially with the near-freezing temperature outside, but the gathering grey clouds threatened rain. It became definitely time to lose some altitude. 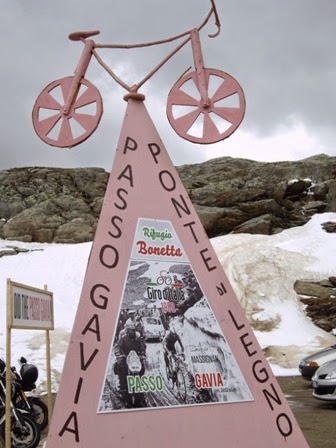 The road down to Ponte di Legno was decidedly less friendly than the yesterday’s speedy descent from the top of the Passo della Stelvio, towards Bormio. With it pot-hole infested switchbacks near the top and its narrow and at times un-barricaded road, I soon discovered why the Giro d’ Italia travels in the opposite direction: one, it’s a far more difficult climb from the south-east, and two, the descent towards Bormio is far less fraught with danger.

Once down into the valley, I soon discovered the SS42 road that led me towards our three night’s accommodation at the ski-resort village of Temù. Nestled in the Val Camonica - a world heritage site - and just a short distance from Ponte di Legno, it seemed the perfect location to have a short day or two’s rest.

Somehow though, I couldn’t bear the idea of coming this far without visiting the Passo del Mortirolo. Added to this was the thought that I’d only climbed Gavia from one side. And worse still – and my good ‘mate’ Lore would testify to this - it was the easy side. That evening, my head lying uneasily on my pillow, I could hear Lore’s words ringing in my ear; “Just not good enough mate”.
Books by Mark Krieger:

“Ride as much or as little, as long or as short as you feel. But ride”.
Eddy Merckx, Belgian road cycling legend
Posted by markkrieger at 02:27