Still half-asleep as I wheeled my bicycle out of the back door of our accommodation at Hotel Villa Margherita, I was greeted by the sight, and sound of reverberating motorcycle engines. Accounting for people's different tastes, you could hear above the crescendo the doomph doomph of heavy metal music, entwined with of all songs, the Barbra Streisand classic, ‘Memory’. It was like a build up to a Suzi Quatro concert; everyone clad in leather, even people’s pets.

Friends and family taking photographs, stood a short distance away from the throng of motorcyclists who themselves, were either engaged in their own quiet conversation or meticulously checking over their bikes. Curious – and somewhat more awake- I asked one of the participants what the occasion was all about. Between the biker’s knowledge of English and my Italian I couldn’t glean too much; only that they were soon heading off on a 211-kilometre trek around some of the passes in the Dolomites.

After taking a photograph of a group of young guys, who seemed as excited about having their picture taken by a 59-year-old Australian cyclist than the ride itself, I headed off on my own journey; hoping to god they weren’t travelling my way. 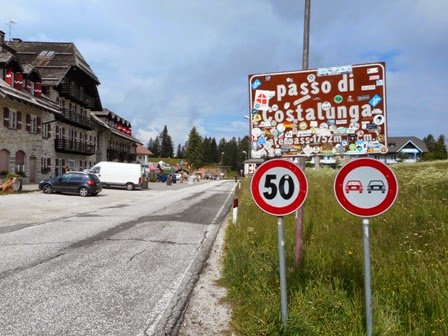 My route continued through the Val di Fassa, along the SS48, but being early morning it was much quieter than the frenetic wet tarmac I found myself on the previous day. At Vigo di Fassa, the valley and I parted company as I headed up toward the Passo Costalunga. With its fairly modest ascent and a flat approach to the top over its final four kilometres, it provided an excellent beginning to a riding day that soon got better.

Leaving the summit, the road led me downhill all the way to Bolzano, the capital city of the province of South Tyrol. Prior to World War I, Bolzano was primarily a German-speaking city belonging to the Austro-Hungarian Empire. During the 1920’s, following Italy’s annexation of the province at the end of the war, Benito Mussolini initiated a programme designed to transfer as many German-speaking people as possible to the Third Reich, replacing them with Italian-speaking immigrants.

Today, the city is the site of the Free University of Bolzen-Bolzano, which caters to not only speakers of the Italian language but English and German as well. Self-autonomous, Bolzano preserves the rights of its now German-speaking minority; which is slightly below 30%. In the process it has become a role model for the successful and fair resolution of inter-ethnic conflict to other regions of the world.

With a population of just over 100,000, it didn’t take me too much time to wriggle my way through Bolzano’s busy streets. The attractive spa-town of Meran-Merano by comparison, was a different proposition. Thirty kilometres to the north, its 17th century stone bridge crosses the fast-flowing Passer River close to the centre of town. Half-walking, half-riding my bicycle along its crowded cobblestone streets, I patiently searched for the right road, the SS38 towards Bormio. Ironically, I’d passed a host of signs throughout the day directing traffic towards Passo Stelvio, the sentinel that separates the Venosta valley in the north and the Valtellina to the south. One hour and four kilometres later, having overcome the dangers of heavy traffic and impatient drivers, not to mention off-road encounters along gravel paths within fruit plantations, I finally reached the road I needed all along, the SS38.

﻿
﻿
Balance restored and with only some 40 kilometres still to travel, I was soon anticipating the left-hand-turn from Spondigna towards Prato allo Stelvio, which lies at the foot of the pass. Here marked the end of my day’s ride. While some of the roads had been difficult to find, the terrain had been easy; certainly nothing compared to the uncompromising summits that lay ahead.
Posted by markkrieger at 01:43