Providing you don’t stay too long and the weather remains fine, having lunch at the top of a climb has its advantages. You give yourself the opportunity to soak up the views and atmosphere of a mountain pass you took the trouble to ride up in the first place; while after restoring your energy reserves you can recommence your journey as if on a downhill ski run. It’s that easy. All you need is a wind vest or last week’s copy of the newspaper to keep you warm.

My lunch break, with Roz, at the summit of the Passo del Tonale was one such experience. While nowhere near as dramatic as either Stelvio or Gavia, the popular winter resort is a wide amphitheatre surrounded by groups of mountains more than a thousand metres higher than its own 1, 884 metre summit. Once forming the Austro-Italian border, the pass, like many others in the region, became the front line of the White War of World War I, where just as many lives were lost through the elements as killed by the enemy.

At the top of the pass stands an ossuary containing the remains of 847 soldiers exhumed from military cemeteries nearby. Inside the building are two lateral staircases that climb up to an open terrace where a bronze copy of the famous Italian sculptor Timo Bortolotti’s statue, the Winged Victory of Brescia faces towards the province of Trentino. While much smaller in comparison, the monument reminded me of the huge mausoleum on the summit of Monte Grappa, which holds the remains of 25,000 Italian and Austrian soldiers who died in similar circumstances, in the Battle of Monte Grappa, in 1918.

Having already climbed Gavia and Tonale before lunch, I was looking forward to the predictable descent that would eventually guide me towards Trento. Only 190 metres above sea level, the lively and prosperous city lies in the wide glacial Adige valley, and at the foothills of the Dolomites. From there, once I found the right road, it would be an ‘easy’ 22 kilometres to our two-night accommodation at Levico Terme. 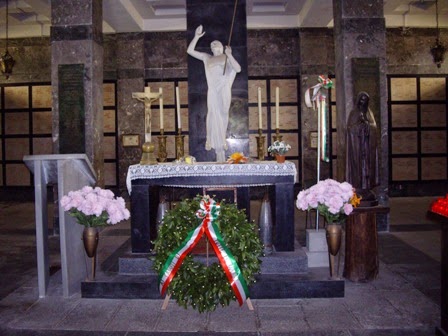 Following the east-west aligned valley of the River Noce, along the very navigable SS42, the next 45 kilometres passed by quickly. Located in the heart of the beautiful Val di Non, and some 40 kilometres from Trento, is the village of Cles, which straddles Lake Santa Giustina, the largest artificial lake in the region. Dominating the landscape over its eight kilometres of length, its construction began during World War II and was almost 10 years in the making. Apart from its beauty and its popularity amongst canoeing-enthusiasts, it is used to collect water from the River Noce catchment area to make electricity.

Now travelling due south on the SS43 I began spotting signs to Brenner Pass, which even since Roman times, has been one of the most important north-south connections in Europe. Beginning its journey in Innsbruck and travelling along the E45 motorway to Verona, its relatively low altitude across the Austrian and Italian border (less than 1,400 metres), ensures that it is open all year round.

The Brenner motorway, or for want of a better name, Autostrade, might be a godsend for cars but it’s no place for bicycles. With less than 40 kilometres to travel, one could realistically assume that in little more than two hours I’d be sipping on a local red wine with Roz while perusing the evening menu. For a number of reasons, bicycle-prohibited roads and tunnels being the most obvious, I was lucky to be dining that evening at all.


Like trying to repair a worn out chain, linking the smaller sections of road together was a frustrating and time-consuming nightmare. With a population of little more than 120,000, I underestimated the time it would take me to reach Trento’s centre, let alone extricate myself out again on the right road towards Levico Terme.

Two hours later, still befuddled by my predicament, I attached myself to a seat in one of the city’s main cobblestone streets. Being 6.30 on a Friday night, the place was crowded with people, many travelling as if they were in an incredible hurry to get somewhere; most likely home. Though I was the one on holidays, I envied them. They at least knew where they were going.


With the help of a kind gentleman – who seemed decidedly less hurried than most – I eventually found a road that would at least carry me in the right direction; the right direction, yes, but the correct road, decidedly not. Whether there’s a road that straddles the SP17 out of Trento, I’m still not sure. What I found myself on however was a dual highway and a menacing-looking tunnel 500 metres up ahead. The lack of daylight between each car in the fast-moving convoy didn’t stop their drivers zooming past me at more than 100kph.With virtually no verge to speak of I stood up against the barricade and pondered what to do. There was no way back, no break in the traffic; just the tunnel up ahead, and beyond it, who knows? It seemed such a horrible place to be, especially compared to the majority of remote roads I’d travelled along so far.

After checking my lights were working, I pedalled cautiously forward. Obviously the Friday rush hour, cars were still hurtling past me, their drivers blasting their horns. They were the sorts of blasts that aggrieved and agitated drivers use when they feel they have the moral high ground. And in this case, they certainly did. Their loud blasts would begin around 50 metres before the driver passed. Their effect on the victim (me) was two- fold. First they scared the shit out of me, next I felt foolish as they finally passed by with their horns still blaring. There was nothing to do but cringe with shame and exasperation - this tunnel was absolutely the last place I wanted to be.

Glimpsing daylight I thought, Never has the saying, ‘the light at the end of the tunnel’ been so apt. Not far beyond the tunnel, the road became a different entity; still busy but not nearly as frenetic. Better still, I could finally turn off onto a smaller road, which though slightly longer, was far more scenic and decidedly less dangerous.

While Roz and I ate dinner, I especially enjoyed the carafe of red wine I envisaged I’d be drinking much earlier that evening. Savouring each sip, which had nothing necessarily to do with climbing mountains, I felt I had much more to be thankful for.