Cycling in Italy: The Venetian Islands

Flying home from Marco Polo Airport the next day, Roz and I spent our last few daylight hours exploring the Venetian waterways. Having visited Venice twice before, we weren’t in too much of a hurry to traipse through its maze of congested streets and lanes for a third time; certainly not in the height of summer. 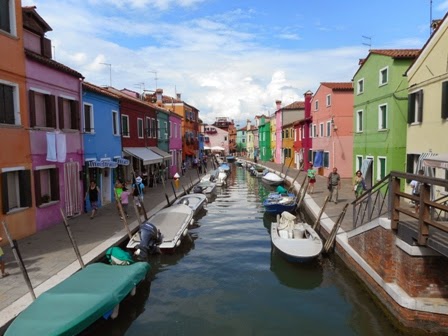 Venice itself was exactly as I’d imagined it to be: stunningly beautiful but very, very touristy. While a big part of it is what you see in the postcards, they capture nothing of its romance and atmosphere. Less than a stone’s throw from the bus terminal, we were greeted by its main street, the Grand Canal, crowded with tiny vessels dexterously weaving their way down the bustling canal. Feeding off it were scores of smaller canals, and the hundreds of bridges (over 400 in total) which cross them.

Situated on the Adriatic coast and built on more than 100 small islands, Venice’s roots date back to somewhere between the 5th and 6th centuries. This was after the collapse of the Roman Empire, a time when invasions by barbarians such as Attila the Hun forced the local inhabitants to leave the mainland for the comparative safety of the islands on the lagoon. As the local populations grew, some of the bigger islands were interconnected by bridges. By the 13th century, Venice was thriving, having established significant trade routes across the Adriatic and Mediterranean seas. However, during the mid 14th century, like much of Europe, the seaport was stricken by the Black Death, which in one year (1347), killed as many as 600 inhabitants per day. Less than 300 years later, it struck again. By the late 18th century, Venice had lost its independence: with minimal resistance, it was invaded by Napoleon, who later handed it over to the Austrians. It wasn’t until 1866, as a consequence of the Seven Weeks’ War between Austria and Prussia, that Venice finally came under Italian rule.

Despite the exorbitant cost, Roz and I took an obligatory half-hour gondola ride. These sleek, jet-black vessels, which lazily thread their way through the city’s network of canals, are such a quintessential Venetian experience, and are just too difficult to resist. Haggling the gondolier down from 80 euro to 60, I felt like I’d bartered a good deal, but when you add up the numbers, I was paying almost as much as four Australian dollars per minute and not much less for every stroke of the oar. Though it was worth it, I was left thinking that Charlton Heston—playing Judah Ben-Hur—would have toiled considerably harder inside the hull of a Roman galley and for no payment whatsoever…….. Extract from ‘Lycra, Lattes and the Long Way Round’.

While our first experience of the somewhat whimsical, somewhat decaying city was far more than a novelty, we were more interested in some of the other islands that share its waters. For the cost of 36 euro, we bought two tickets that gave us a day passage on the local water-taxis. While often packed to the rafters with tourists over the summer holidays, the taxis provide the local populace with a vital link between the islands.

After taking the mandatory journey along the Grand Canal towards San Marco Square, we travelled to the long sandbar of Lido, which is home to about 20,000 residents. Interestingly, a real-estate boom hit the island during the 1960s, possibly due to the shrinking availability of affordable accommodation in Venice itself, or perhaps it was just time to head towards higher ground.

The small island of Burano was by far the highlight of our day. A miniscule version of Venice, it nevertheless has its own distinctive qualities, most notably, it’s multi-coloured streetscapes. Once ashore, you only have to stroll down the first narrow lane you encounter to realise that the island’s small, brightly painted houses are popular with artists. A decree, made during medieval times, ensures that residents are only permitted to paint their home according to a specific selection of colours chosen by the government.

Almost completely residential, Burano is home to a population of nearly 3,000 inhabitants. Formerly occupied solely by fishermen and farmers, the island has profited economically, largely thanks to the craft of its lace workers from the 16th century, and in more recent times, the tourist trade. We only had to venture along Via Baldassarre Galuppi - one of the island’s wide cobbled streets, besieged by busy restaurants and gift shops peddling local produce and other bric-à-brac - to witness its popularity for ourselves.

So taken were we with our visit to Burano, we spent far too long there than we should have. Our next island destination, before returning to Venice was Murano, which like Burano, is a series of smaller islands linked by bridges. With a population of more than 5,000, it’s widely renowned for its magnificent glass making and lampworking.

Somewhat more developed and stately-looking than its smaller neighbour across the lagoon, Murano’s streets and canals were virtually deserted by the time we came ashore. There, not much more than 30 minutes, a violent wind began whipping the previously calm water into waves, while a heavy blanket of grey cloud hung directly overhead.

Sensing a storm was only moments away, shops immediately began packing up their wares and closing their doors. A bit like panic-stricken passengers scrambling for the very last life-boat, people hurriedly made their way through the streets for the relative safety of the water-taxi station. Rather belatedly, we followed the ‘terrified’ throng ourselves, though not too late to get what we asked for; a heavy soaking.

By the time we reached Venice’s half-deserted streets things weren’t any more lively than they were back in Murano. Instead of heading back to our accommodation at the Hotel Altieri in Mestre, we decided to stay a little while longer, at least for dinner. More peaceful and bleak than we’d ever seen it before, the evening gave us a glimpse of what Venice might be like during the colder winter months. Funny, but I’d always wanted to see it this way; with far less hype and the heavy waves slapping against the boat-moorings and its three and four storey-high buildings. For some reason, it just makes it seem a little more real.

Just before boarding our bus back to our accommodation, I stood looking out at the Grand Canal, possibly for the last time. I’d probably squeezed enough out of Venice to know there were so many other places I wanted to see before coming back. But for all its shortcomings it’s an absolute must. It is an original, mystical and somewhat whimsical city. After its 15 centuries in existence, one hopes that it doesn’t turn into another Atlantis and become swallowed up by the sea... Extract from ‘Lycra, Lattes and the Long Way Round’.