With nowhere near the vigor of our Spanish night owls, we were fast asleep by midnight. Come 9am the next morning I was already on my way towards the magnificently whitewashed walls of Alora, a long day’s cycling to the west.

Just 20 kilometres by road from Trigueros is the fortified walled town of Niebla, which resides on the banks of the Río Tinto. Rising in the Sierra Morena to the north, the Red River, as it’s otherwise known, has been mined for its copper, silver and gold since ancient times. Tinged red, as a result of iron deposits, the river roams through 100 kilometres of Andalusian landscape, its water acidic enough to eat through metal.

Accounts of mineral wealth, particularly silver, enticed Phoenician traders to the south-western shores of the Iberian Peninsula, laying the foundation of a succession of Greek, Carthaginian and Roman invasions during the centuries that followed. After a long hiatus of almost a thousand years, its mines were rediscovered and eventually sold off by the Spanish government to a British syndicate – soon launched as Rio Tinto - for considerably less than their true value. As little as four years later, the Rio Tinto mine had become the world’s leading producer of copper. 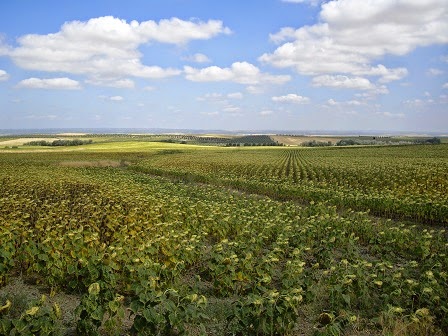 In 1954, the mining company began selling off its stake in Rio Tinto, using the funds to finance extensive exploration in other parts of the globe. Now the second largest mining company in the world, behind BHP Billiton, it is digging more iron-ore out of the ground than ever before. Realising a 4.4 billion dollar profit in the 2013-14 financial year and with plans to markedly increase shareholder returns, the once British-European syndicate has gone from strength to strength. Meanwhile, the blood-red waters of the Rio Tinto continue to quietly trickle past Niebla’s ancient walls.