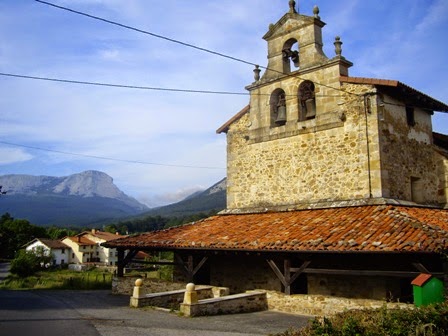 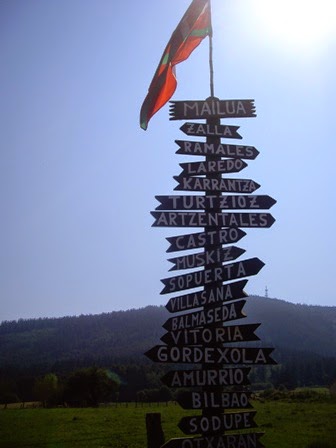 Feeling a tinge of regret that the French Pyrenees would soon be at my back, I started out on the D15 towards the summit of the Izpegi Pass, and Spain. A short 10-kilometre ride to the foot of the climb, at Saint-Étienne-de-Baïgorry, it’s another nine to the Spanish border. But first you must negotiate the 5.8 percent average gradient which gradually increases in steepness towards the top, a petty admonishment for abandoning the eminent Pyrenean passes of the French Grand Tour for its Spanish understudy.

But I couldn’t think of a better way to reacquaint myself with a country on a bicycle than by descending 17 kilometres at a near-three percent gradient. All you have to do is guide your handlebars without falling asleep. A lone figure on a bike, I was soon met by a small herd of horses lazing nonchalantly by the side of the road, a pleasant reminder that the Pyrenees belongs to all creatures, not just the human variety.

Carrying a ‘trusty’ map and having ridden this section of the route before-though from the opposite direction-I held little fear of getting lost. After all, I just needed to follow the main road, the N-121-B through Elizondo, before turning onto the NA-170 towards Leitza. From there it was just a matter of another 75 kilometres to our overnight accommodation at the Casa Rural Maialde, in Elgeta.

Lying between my present location and the village of Elgeta were an array of small climbs. Sometimes they’re termed ‘puertos’ and on other occasions ‘altos’. In fact, due to its undulating landscape, the Basque countryside is crammed with almost as many road passes as there are roads themselves, most in the vicinity of between five and seven hundred metres high. The Basque Mountains are considered by some to be a separate, slightly smaller range, between the Pyrenees and the Cantabrian Mountains that stretch more than 300 kilometres across northern Spain. Others simply regard it as the eastern foothills of the Cantabrian Range. 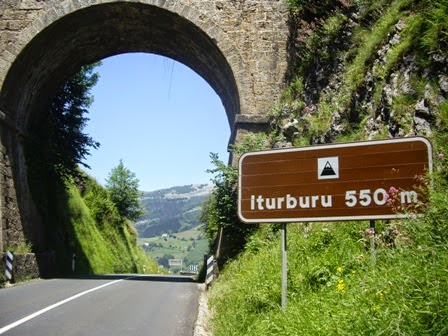 While gliding along, presently without a care in the world, I mulled over the subtle differences between a puerto, an alto, a pico and even a collado, the four words used most often to name a Spanish mountain peak or pass. Though I’d climb many of each during the weeks ahead, telling the difference was almost as challenging as getting to the top; of at least some anyway. In all of my fifty-nine years, I’d never given it any consideration whatsoever, except for being partial to the words ‘puerto’ and ‘alto’ in comparison to ‘mount’ and ‘hill’, the titles we afford here in Australia to anything higher than a sand dune caused by a fierce northerly wind. For me, the words ‘puerto’ and ‘alto’ have a more positive air about them, certainly when compared with their deadpan Australian equivalents. Give me the thrill of climbing an alto in preference to a hill any day!

No more difficult than Grade Four Geography, the Spanish terms ‘pico’ and ‘alto’ should be easy enough to understand. Like their French counterpart ‘mont’, they simply mean ‘the very top of a mountain’. Likewise, the French term ‘col’ and its Spanish equivalent ‘puerto’, translate to a mountain with a road over it, or if you like, ‘mountain pass’, terms patently used on each side of the Pyrenean border. But here lies the ambiguity. Sometimes an alto can turn out to be a mountain pass as well as a dead end. As for a ‘collado’ meaning a ‘mound’ or at best a ‘hill’, so too can they. 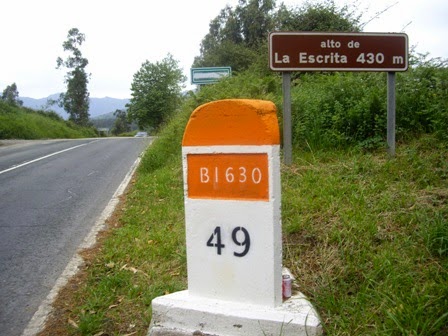 While no closer to an understanding of these subtle Spanish nuances it seemed as if I’d travelled more than 50 kilometres in no time at all. It’s fascinating the thoughts you while away the hours with when you’re on a bike. The Basques had it covered in any case.

It was noticeable as I wound my way up and down the network of secondary roads that guided me to the summits along the route, that most of the signs simply inscribed the name of the pass. Possibly alert to the fact that its difficult enough to get over the top of a climb without confusing cyclists with what they’re climbing in the first place, ‘Artaleku 494m’, ‘Deskarga 510m’, ‘Bidania 510m’, ‘Iturbiru’ 550m’ and finally ‘Pagatza 475m’ at the end of a long day’s ride, was as much information as I needed. Hungry, weary and covered in sweat, the sight of Roz, her arms outstretched and shouting “Bienvenido a España” (“Welcome to Spain”) from the window of our well-appointed third storey apartment above me, was all I wanted to hear.