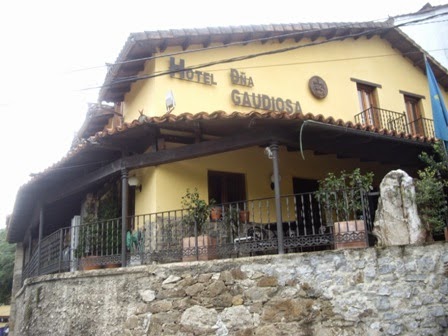 That night we enjoyed a wonderful meal at the bequest of our hosts at the Hotel Doña Gaudiosa, an Asturian country home, conveniently located near the bottom of the road towards Angliru. Just as pleasurable was our conversation throughout the evening, despite the linguistic chasm between us. A very gracious host, Aurora spoke only Spanish but what she lacked in verbal communication, she more than made up with patience and ingenuity. Using her laptop as her translator, she would ask Roz to type parts of our conversation in English and convert it to Spanish. Her convivial husband, Agustin, who was born just across the Pyrenean border in France, was proficient in both European languages, though he wasted no time in reassuring us that the phrase ‘Vive la France’ (Long live France) would never be in his vocabulary repertoire. As for Roz and me, we had some knowledge of French to fall back on, and a few words of Spanish. 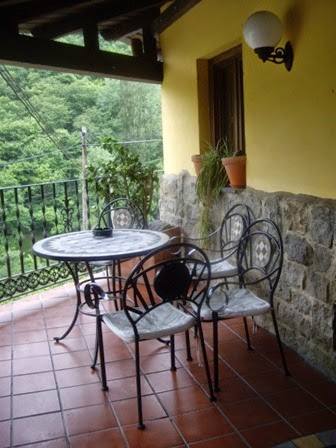 Later in the evening we were joined by another couple, apparently close friends of our hosts who lived a kilometre down the road in Pola de Lena. Immediately in high spirits, we were given the distinct impression that they met together quite regularly to share a bit of local banter and a few drinks around the bar. Using a medley of English, French and Spanish, and even charades when conventional language didn’t work, the six of us had loads of fun trying to help each other understand what it was we were trying to say.

The subject of cycling came up many times throughout the evening. Patriotic about their mystical mountain, La Gamonal, and the Spanish cyclists who call the Asturias home, each of our new acquaintances told us they’d watched the Vuelta’s procession parade by on numerous occasions. A trifle inebriated, having reached the time of the evening where assertion is used more often than tact, Roz made a throwaway line in reference to her dislike of Spanish cyclist Alberto Contador. In less than a millisecond a collective gasp went around the small room. Winner of all three Grand Tours, including the Vuelta a España on three occasions (in 2008, 2012 and 2014), Contador wasn’t just a favourite, he was god. No amount of foreign language snafus was going to save her as the tenor of the conversation suddenly became more serious.

Dreading the next comment and from whose lips it might come from, I just hoped it wouldn’t be from Roz. her next words about the cyclist being stripped of his 2010 Tour de France and 2011 Giro d’Italia titles, due to his ‘accidental’ ingestion of the banned doping product Clenbuterol. We both had our own scepticism about food contamination being the cause but this was not the time or place to air them.

Finally, like a scythe slicing through hay, Roz cleared the air of the building awkwardness around the room. Choosing her words more carefully than seconds earlier, she proclaimed a toast to Asturian rider Sammy Sánchez, who hails from the region’s capital city Oviedo. He being born just a 60 minute ride up the road and regarded as one of the most popular cyclist’s in northern Spain, it was a timely response.

Rejoicing over another Spanish beer from Agustin’s wide collection, we continued on, almost until midnight. Though a little done in next morning, it was well worth it. Thanks to Sammy Sánchez and our wonderful hosts, we’d undoubtedly been treated to our best night’s entertainment so far.