Whether it was the difficult to understand signs, the maze of roads or just simply my inability to combine the two together, I was looking forward to travelling further west along some of Cantabria’s quieter and more direct thoroughfares. Up until now, never being far from Spain’s busy coastline had made the possibility of finding a remote road all the more unlikely. The first two hours of a brand new day were, by comparison, the complete opposite.


Following the Rio Asón gently uphill between Ramales de la Victoria and the tiny village of Arredondo, I passed another cyclist who had briefly stopped by the side of the road. With a climb not far ahead, I decided to slow down and wait for him to catch up. We were heading towards the Puerto de Alisas, which is one of the most popular climbs in Cantabria. Regularly featuring in the Vuelta a España since its introduction in 1979, it’s a category 1 climb, averaging 5.4% over its 9.5 kilometres. 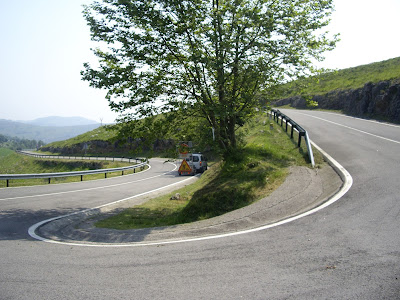 Though not incredibly steep or soaring at an unremarkable 674 metres, the climb was high enough to offer us magnificent views of the Cantabrian coastline to the north. But what was most absorbing of all was our conversation. Antonio was the cyclist’s name and he was on a 60 kilometre round trip from his home in Solares, a small village close to Santander. 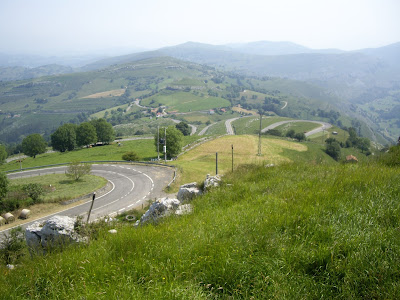 While unable to articulate a word of English, Antonio, of course, spoke plenty of Spanish and a little French. Despite my own limited array of southern European vernacular, we somehow managed to string a conversation together for the duration of the climb and the descent that followed. In fact, the biggest stumbling block was our shortness of breath three-quarters of the way up the pass. It’s always difficult for me to converse in any language when cycling up a near 7% gradient.


We of course, discussed cycling, mountains, French and Spanish ones mainly, and even families. He was 51, married and had a daughter aged 9. Another benefit of cycling, and just about any sport or common interest, is not only the people you meet but how easy it is to initiate a conversation. I’m not exactly sure why I waited for Antonio, up until then a perfect stranger, to make the climb. Normally, I’m just happy to ride alone at my own chosen speed. What I do know, however, is that sharing the experience with someone else, and on their own home soil, made it all the more memorable. 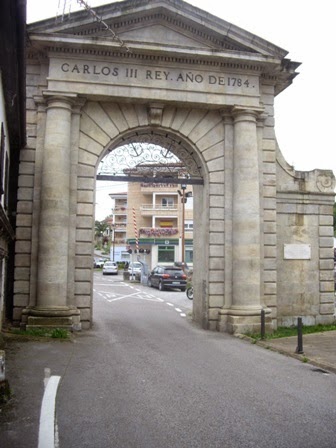 At the bottom of the descent is the small town of La Cavada, which in concert with nearby Liérganes was the site of the first artillery factory of its kind in the country. The Real Fábrica de Artillería de La Cavada (Royal Artillery Factory of La Cavada) was the country’s only manufacturer of iron cannons in the early 17th century, in preference to bronze which had long been the tradition in Spain. For 200 years after its inception in 1622, the foundry produced more than 26,000 cannons and 6 million cannon balls for the ships and fortresses throughout Spain’s vast empire. Privately owned, it held a monopoly over the country’s iron production until midway through the 18th century, when it became controlled by the state. The gradual decline of the Spanish navy, intensified by its defeat, along with the French, at the Battle of Trafalgar, in 1805, adversely affected future production. An increasing lack of demand and revenue over the ensuing years, as well as a shortage of carbon, resulted in the foundry’s complete closure in 1835.

Today little remains of La Cavada’s artillery factory, save for its archway, the Puerta de Carlos III, which once regally guarded its entrance. It’s now the site of the Town Hall, the library and a cannon museum, which faithfully displays various artefacts that have endured over time.