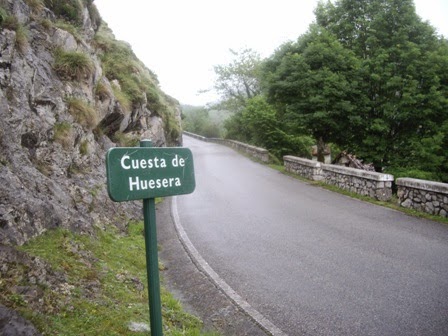 Those following this year's Vuelta d'Espana would probably know that tonight's stage 15 race from Oviedo finishes at the top of the climb up the Lagos de Covadonga. One of the most often used climbs in the Vuelta, it is situated in Spain's stunning Picos de Europa National Park. If you were lucky enough to watch last night's television coverage on SBS you would have not only witnessed some absorbing cycling but a travelogue of magnificent views as well.

I've been fortunate to have climbed the Lagos de Covadonga twice now, once in 2009 and again, on a fairly inclement afternoon, in 2011. It was the first Spanish road mountain I ever climbed, something of a test-run before my ascent up the Alto de l’Angliru two days later.

......Beyond Ribadesella, the road turns inland towards Cangas de Onis and the stunning Picos de Europa, Spain’s first ever National Park. This is where you find the Lagos de Covadonga climb, which regularly features in the Vuelta a España bike race, held every year between August and September. An impressive climb, it is 14.2 kilometres in length, with an average gradient of 7.4%. 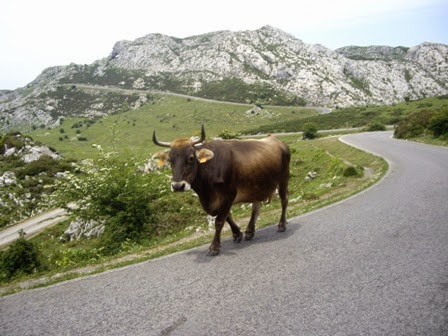 This being the first real mountain of “my” tour, I was looking forward to it. I was eager to see just how the bike would go, particularly with my old body pushing it. I may have just ridden over 2,000 kilometres on the flat, but I hadn’t done any serious climbing in more than a month. The reading I’d done on the Alto de l’Angliru, which I was climbing the next day, suggested that today’s ride would only be a warm-up. It made me think I should keep a couple of gears up my sleeve, just for security’s sake. Security can be a good thing when you’re a little afraid. And I was afraid.

My first intention in terms of the Lagos de Covadonga was to reach the top. The second was to enjoy it. I had to find a happy medium between my competitive streak and savouring the moment. When you look forward to doing something so much, there’s all the more reason to take it in and make it last. That’s how I felt about climbing this mountain and all the others that followed.

From the moment I left Santuario de Covadonga I felt like a dog being set free off its leash. But I had to check myself from going hell for leather, for what I needed more than anything was to find a pace and gear I was comfortable with. Almost immediately, I found myself travelling through luxuriant forest, fast-running streams and over bridges. Even the switchbacks didn’t bother me—I was so looking forward to seeing what was around the next corner. Then, as I wound my way up the mountain, quaint Spanish dwellings, sheep, goats and plenty of cows on the road gave me enough to think about other than the gradient. I was beginning to feel like Christopher Plummer and Julie Andrews on their way over the Alps in The Sound of Music. The hills were certainly alive, and what’s more, I was in them.

Then, about 7 kilometres from the top, I reached the Cuesta de la Huesera, a nasty pinch of 15% which went for almost a kilometre. At that stage, with my lungs gasping for air, my primitive instincts took over. I no longer gave a shit about the hills being alive. As long as I was alive, that’s all that mattered. With sweat pouring down my face and saliva dripping from my mouth, I started pedalling my guts out, all the while hoping I could at least keep two gears in reserve for the climb up Angliru.

Eventually, the gradient lessened, and with it my discomfort. At the top, I was greeted by two beautiful lakes—Lake Enol and Lake Ercina—which were once the centre of the park. Here I was, standing in this huge basin, surrounded by a jagged limestone massif as far as the eye could see. The pleasure far outweighed the pain, and the time it took to get there.

After Covadonga, Roz and I still had a bit of serious walking to do, along the spectacular 12-kilometre track through Cares Gorge. In a straight line, it was only 13 kilometres to the start of the walk, but it was more than three times that distance by car.

The National Park is divided into three significant massifs known as the Western Massif (el Cornión), the Central Massif (los Urrieles), and the Eastern Massif (Andara). These are separated from one another by incredibly steep river gorges. The Cares River is one of these, dividing the Western and Central Massifs from each other.

To get to the beginning of the track, in the heart of the Central Massif, we first had to travel to the small, isolated town of Poncebos. From there it was a short funicular ride up the 19% slope to the even more remote village of Bulnes. It did serve beer, though. It was just that the bar where we bought it from seemed a little out of place with the rest of its surroundings, a bit like having a celebratory drink of Penfold’s Grange at a table in the Antarctic.

Stepping back out into the isolation of the mountains was a little daunting, despite my many years of hiking experience. It was an overcast day and I felt extremely, and stupidly, unprepared—we weren’t even carrying jumpers. My thoughts that morning were to do with cycling, rather than walking, but that was no excuse. It might have been early summer but we were walking at an altitude of at least 2,200 metres. It turned out fine but you never know when it comes to height above sea level.

The hour’s walk back from Bulnes to Poncebos was by an old mule track that before the year 2000, served as the only means of external access to the outside world. It would have made for an interesting journey by mule, particularly when laden down with goods.

Following the valley floor a long way below, the track snakes its way around the steep mountain slopes on each side. While the views were breathtaking, some narrow sections of track demanded all the concentration we could muster. After crossing a small bridge, however, it wasn’t long before we arrived back at Poncebos. To the northwest was the Vega de Ario peak (1,630 metres), and the beautiful Lake Ercina, little more than 5 kilometres beyond.

We finished the day with a short evening stroll around Ribadesella’s picturesque harbour. Like most of the places we’d visited at night, it took on a completely new feel when illuminated by moonlight.

The next morning we were reluctant to leave such a beautiful and relaxing place, and dithered around trying to soak up every last moment we could. So much so that it was almost midday before we were finally in the car and heading west towards Oviedo, and beyond it the Alto de l’Angliru......
Extract from: Lycra, lattes and the Long Way Round.