Cycling in Spain:Muñón-Cimero to Cangas del Narcia (via Angliru) - 175 kms 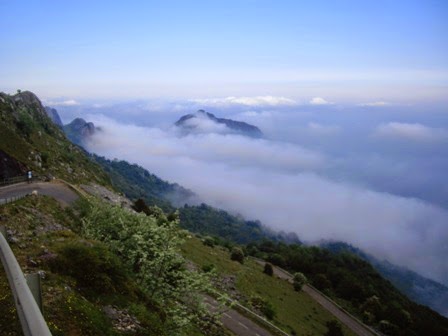 All six of the Vuelta a España’s visits to the summit of the Alto de l’ Angliru have been via La Vega, the small capital of the municipality known as ‘Riosa’. Something of a poor relation, in cycling terms anyhow, is the tiny village of Santa Eulalia, which lies 18 difficult kilometres to the north. With an average gradient of 7.9% over its 17.7 kilometres, it looks considerably easier on paper than its more favoured counterpart, though it doesn’t necessarily play out that way in reality.


The first 11 kilometres of Angliru’s less-known route reminded me of climbing Italy’s Monte Zoncolan, from Priola. While to this point, the Spanish road is not half as steep, it is precariously narrow, pothole infested and surrounded by dense forest, engendering a feeling of isolation and claustrophobia. The kind of road you’re less likely to see even another cyclist on, it soon became obvious why the Vuelta’s entourage prefers its more navigable and steeper alternative from La Vega. But once the two roads converge about six kilometres from the summit, just like they do on the French Tour’s own legendary climb Mont Ventoux, the gradient is exactly the same; horrendous.

﻿﻿﻿﻿
Doggedly ascending the steep zigzagging ramps for the second time in two days, I held no reservations about reaching the summit. But with the 20%-plus gradients relentlessly re-appearing over the remaining few kilometres, it was still difficult enough. Heaving for breath and with perspiration rolling off my face, I never lost sight of the fact that I wouldn’t even have been up here without today’s sophisticated gearing systems, something the pioneer cyclists of the early Grand Tours, like the Giro d’ Italia and the Tour de France, never had the luxury of.

Standing at the summit and admiring the view, I felt more satisfied than just about any climb I’d done before. I remembered the first time Roz and I arrived at the bottom of the ascent in La Vega, in 2009, having spent the best part of the day trying to find it, amidst the network of narrow mountainous roads. Even the overseer at the La Vega Tourist Office was surprised to see us, having flown all the way from Australia, and me climbing the mountain so late in the day and with rain imminent.


A crazy cattle track, it’s probably equally crazy that I bothered to come all this way to climb it once, let alone four times. Strangely, there’s some motivation about knowing exactly what to expect around almost every bend in the road. Whatever our passion, the idea of striving towards something that is not easily attained, even as ‘trivial’ as climbing up to the summit of Alto de l’ Angliru, can be uplifting. At the very least, it’s a liberating diversion from what can become the routine of life.