Cycling In Portugal: Luso and the Buçaco Forest


One of the more well-known towns in Portugal, due to its widely consumed bottled water, Luso lies at the foot of the beautifully forested Serra do Buçaco. Many centuries old, the 105 hectare forest was first settled by Benedictine monks during the 6th century. A millennium later, an order of barefoot monks, the Discalced Carmelites from Coimbra had taken over, building a monastery and fortifying the surrounding forest with a high stone wall. It wasn’t until 1834, during the long period of anti-clerical sentiment throughout Europe that the monastery finally fell into government hands. Considering that in 1622 Pope Urban VIII delivered a papal edict declaring that women entering the forest would be excommunicated, one could be forgiven for stating that this was 200 years too long. 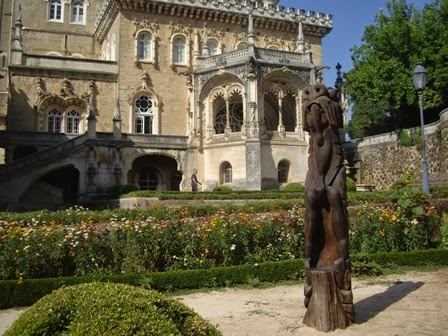 Over the centuries, the monks and the government foresters who succeeded them, sowed more than 700 species of plants, with as many as 300 imported from different places around the world. During the later 19th century, the Portuguese royal family commissioned the construction of a summer palace and hunting lodge on the site of the Carmelite monastery. Completed in 1907, shortly before the assassination of King Carlos I and his heir-apparent, Prince Royal Luís Filipe, the king’s chef, obviously a resourceful type of fellow, obtained government permission to convert the palace into a hotel. Ready for business by 1910, the extravagantly ornate ‘Palace Hotel’, has become a popular, though somewhat indulgent and over-expensive tourist destination for travellers throughout Europe and the wider world.

No slouch itself, Luso has its own list of attractions, not least its spa resorts, known for their water’s healing properties. Purportedly able to cure anything from rheumatism to kidney diseases, it was a common sight to see people, empty bottles in hand and in crates parked at their feet, waiting in long queues to fill up from the freely flowing water fountains near the centre of town.


Something of an avid skeptic, I indulged Roz by joining one of the queues with her to fill up my own water bottles for my ride the next day. Approaching sunset on a peacefully still evening, it was difficult to imagine a battle waging close by two hundred years earlier. In 1810, 66,000 French troops attacked the Duke of Wellington’s British and Portuguese forces during Napoleon’s unsuccessful invasion of the country.


Residing in the monastery at Buçaco, the British commander assembled his 40,000 Anglo-Portuguese soldiers amongst the wooded foothills of the mountain. While taking days for the French, in particular, to manoeuvre their forces over the rough terrain, the battle was over within a day; though still time enough to destroy significant parts of the forest and render almost 6,000 losses between the protagonists.

Unlike the Buçaco Forest in the years ahead, the French invasion of Portugal ultimately ground to a halt within seven months.