Cycling in Spain: The End of the Earth

Early next morning, Roz and I made the eight kilometre return trek to the Cabo de Finisterre. Ever since planning our journey seven months earlier, we were longing to discover for ourselves, what this supposed ‘End of the Earth’ would actually look like. Lying on the southern edge of town was the Igrexa de Santa María das Areas. A blend of Gothic, Romanesque and Baroque architecture, this 12th-century church, still used today, is one of the more popular historical attractions in town. Suffice to say, much more curious about what lay further down the road, we didn’t venture inside.

Standing on a 238 metre-high promontory, at the tip of the cape, is an impressive lighthouse overlooking the equally impressive Atlantic Ocean. One of the most recognised landmarks in Galicia and the most western lighthouse on the European continent, its octagonal shaped light tower can warn ships of imminent danger more than 60 kilometres out to sea. 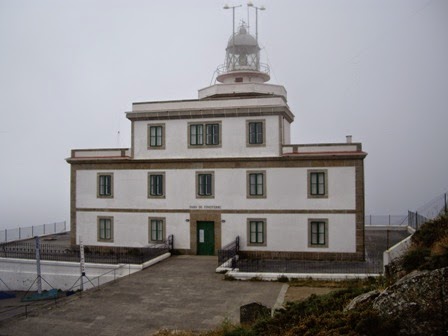 ﻿﻿﻿﻿﻿One of the rituals of hikers who walk the entire length of the Camino de Santiago is to dispose of their walking boots. Some hang them on poles or ditch them in the ocean, while some even burn them. Having hiked extensively through the Tasmanian Wilderness, as well as long trails in England and Scotland, I can understand why they no longer have any use for their boots. Their feet aching and most likely bloodied and blistered, it’s an affirmation that they have no need to do something so torturous again. That’s of course, until the pain and discomfort quickly disappear and all they’re left with are the wonderful memories of their cathartic expedition. A journey on a bicycle, in fact any planned journey, is exactly the same.

Interestingly, there is even a bronze statue of a boot on a large boulder near the end of the road. Perhaps it’s there to pay homage to all the pilgrims and hikers who have made the journey, or maybe at the earth’s end, the periphery where land becomes sea, a pair of shoes is nothing more than an anachronism.