If the road that brought me to Vilalba was one to look forward to, then the one that carried me away was even better. At the end of it, and the innumerable others that would follow, Roz and I would be in the ancient seaside village and fishing port of Fisterra. ‘Finis Terrae’ in Latin, its name translates to ‘Land’s End’ due to its close proximity to the most westerly point of mainland Spain. 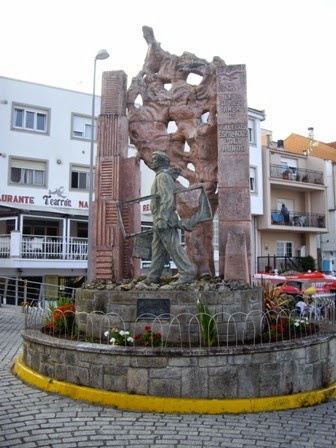 Following the discovery of Saint James’ tomb, pilgrims, not content with finishing their long journey in Santiago de Compostela, travelled the additional 100 kilometres to the ‘End of the Earth’ to worship an image of Christ. During the 15th century, even a hospital was built to treat pilgrims who were arriving in droves, obviously a little worse for wear following their emotional and physical ordeal. While for many varied reasons, as well as Christianity, just as many visitors travel there today.

As I continued my own two-wheel journey towards the coast, I passed many walkers along the way. Straddled out along the main road like a truck gradually losing its load, most carried a heavy rucksack and the obligatory walking stick. Following one of the traditional pilgrim routes towards Santiago, as indicated by the number of shells, its well-known insignia, their journey would soon be at an end.

Only four hours ride to the Atlantic coast, the fact that I’d been travelling almost 2,000 kilometres due west over the past fortnight, wasn’t lost on me. Re-visiting magnificent regions like the Pyrenees and the Asturias were as familiar to us as waking up in our own bed, but we’d also discovered new and interesting places along the way. And soon, just like the kid with a mouthful of sweets and his hand still in the lolly jar, we couldn’t wait to turn south along the Portuguese coast before heading back into Spain.