Cycling In Portugal: The Alentejo-Cork 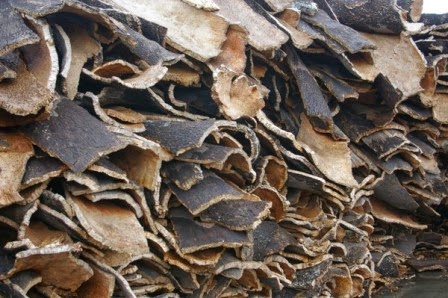 As I travelled further south through the gradually changing landscape, the most notable transformation was the strands of gnarled orange trunks bestriding the road. Churning out 52% of the world’s production of cork, skilled workers have for generations harvested the bark from Portugal’s centuries-old forests. Using a small steel axe, they deftly cut an incision into the tree’s outer layer before transferring the near-weightless slab onto a flatbed truck. Meanwhile, women in traditional straw hats brand the newly disrobed tree with a white paint to indicate the year it was harvested.


The cork from Quercus suber, or more simply, the Cork Oak tree, has been bunging wine and champagne bottles since the 18th century. Still a prosperous enterprise, the country’s vineyards and southern cork plantations are as interdependent as ever. Between them they account for 67 per cent of Portugal’s cork exports. The cork industry alone supports around 13,000 workers and their families - most of them from rural areas where jobs are often scarce – and just as many more people through transportation and seasonal harvesting.

Until the beginning of the new millennium, Portuguese cork companies had profited from their long-standing domination of the world cork market. The early years of the 21st century however, brought with it a changing trend towards synthetic closures and screw caps, which today still poses a significant threat to the industry. Australian and New Zealand winemakers in particular, became displeased with the unreliable quality of cork stoppers and the occasional cork taint that supposedly ruined the unique chemistry between an age-old red and grandma’s lamb roast. 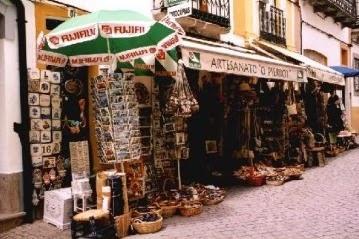 If things weren’t already tough enough for Portugal’s cork industry, the proliferation of Eucalypt trees since their introduction in the late 18th century, has led to a steady decline in the number of cork trees. This becomes more of a matter of concern when you consider that Cork Oaks take three times as long to grow as Eucalypts. Furthermore, cork can only be harvested every nine to twelve years, taking around 40 years for its bark to become commercially viable.

Despite the steep drop in the demand for cork over the last decade and a half, today’s cork producers are beginning to explore wider markets for their material, as well as making better use of the advanced technology available. Historically, a part of a slowly evolving industry, cork factories now rely more heavily on computer-assisted automation and tools such as chemical read-outs to scan for signs of cork taint.

As well as venturing into new markets, such as the emerging economies of China, Russia and Brazil, Portuguese cork producers are also entering into people’s homes via other means than the carefully stocked wine cellar. Renewable, sustainable and environmentally-friendly cork is being used more and more as an alternative for floor and wall constructions, footwear and fashion accessories, and even as a mechanism for mopping up oil spills.

You only had to take a short walk down Evora’s Rua Cinco de Outubro (Rua 5th of October), to behold the variety of cork products tempting the tourist dollar. With little left to the imagination, a hotchpotch of personal items were on display along the stretched out line of shops, selling anything from cork umbrellas to yoga mats designed to make standing on your head an even more therapeutic experience. 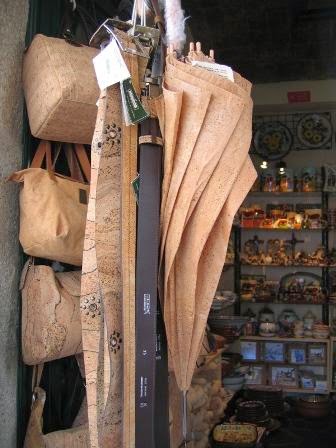 Merrily popping the cork of our bottle of Portuguese red later that evening, I felt reminded of the fact that at least when it comes to carbon footprints, a cork has it all over a synthetic closure. With so much merchandise these days being made from artificial material, there’s something old-worldly about the South’s Cork Oak forests. Unlike other forest industries, they are protected from felling and have for centuries played an intrinsic part in providing a habitat for endangered species, such as the Iberian lynx, the Barbary deer and black stork. With a lifespan of around 200 years, its trees are silent, unhurried bystanders to a perpetually changing world never far away.