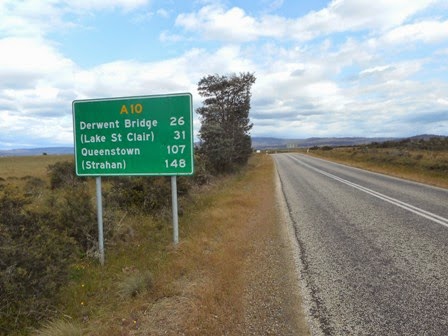 Back on the Lyell Highway, from Bronte Park Village, I was immediately heading uphill into a typical Tasmanian wild westerly wind. Averaging barely 16 kilometres an hour I’d resigned myself to an awfully long day if the conditions didn't change. But cycling’s not like that. Eventually, there’s a downhill to come, a change of direction or a long section of road that’s sheltered from the wind. Thankfully, the ride to Derwent Bridge was just that. No sooner had an hour ticked over and I was sitting with Roz enjoying a mid-morning coffee at a local café.


The last time I’d enjoyed a coffee at the same rest stop was almost six years ago when my daughter, Heidi, and I last hiked Tasmania’s Overland Track. Despite the freezing cold temperatures at night, it was a relatively mild winter, which made walking through snow not quite so difficult. Rather ironically, it was the only time I’d visited the national park when it didn’t rain.


Today, I wasn’t to be so lucky, as the threat of lightning, thunder and heavy rain, soon materialized. It became just like the most miserable of days when hiking through the Tasmanian scrub. My feet already saturated and my thoughts long past keeping them dry, I’d simply trudge through the boggy mud, the puddles, even the creeks. The only good thing about being absolutely soaked, sodden, drenched, almost entirely submerged in water is that you can’t get any wetter than you already are.


With water sluicing at my pedalling legs and my hands frozen to the handlebars like solvent cement, I soon passed a sign telling cars that the next fuel stop, in Queenstown, was 86 kilometres down the road. With nothing in between it was to be a wet lonely road, with little to occupy my  other than willing the kilometres on my bicycle computer to tick over as quickly as possible.


With little variation in the weather over the next three hours, save for the deeper puddles and road-kill along the way, there was nothing to think about short of concentrating on the road out in front of me. With only a few cars having passed me, from either direction, I suddenly caught sight of an explosives truck hurtling along the road towards me. It was just the tonic I needed, thinking about one of my favourite classic films, to help while away the next few kilometres:


‘……The pained expression of the lonely French cyclist Louison Bobet, pictured against the stark mountain backdrop, somehow reminded me of that 1953 French movie, The Wages of Fear (Le Salaire de la Peur). I first saw it as a teenager almost four decades ago. It was one of those black and white classics that featured way back when, either as the Late Movie, the Late, Late Movie or the Late, Late, Late Movie, on the Channel Nine Network. As I remember it, this trifecta of mouldy-oldies produced some of the best television you could wish for, certainly a whole lot better than the banal telemarketing served up to today’s insomniacs. For whatever reason, some of these movies stick in your head like fossilised footprints, lying dormant until their memory is triggered by some new or unusual thought, in this case Ventoux. Weird stuff, people’s thoughts!

Propelling French singer-come-actor Yves Montand to movie stardom, the film’s plot is pretty simple. Four desperate men have to cart two trucks of highly volatile nitroglycerin across 500 kilometres of rugged South American terrain, without blowing it, or themselves, to high heaven. In return, they will each receive the sum of 2,000 dollars. Holed up in the dirtiest and dingiest town you could imagine, inhabited by a veritable cesspool of low lifes, including murderers, criminals, an ex-Nazi and petty thieves, they see this suicide mission as an opportunity to drag themselves out of their squalid existence. Filmed entirely in France, tension builds as they try to negotiate the dangerous mountain dirt roads. Like Ventoux, the terrain looks brutal, accentuated by the stark black and white cinematography. Superbly edited, it is edge-of-your-seat stuff as they toil recklessly, literally and metaphorically on the edge of a precipice……’

Extract from ‘Lycra, Lattes and the Long Way Round’.

‘All journeys have secret destinations of which the traveller is unaware’.
Martin Buber
Posted by markkrieger at 03:51