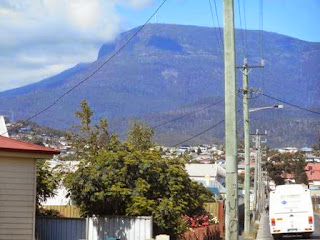 ﻿﻿﻿Early morning, the road back to Sorell was much quieter than my journey to Port Arthur two days earlier. With the roadmap already in my head, the rises seemed easier, while the slopes quickly transported me to the next landmark along the way.

Once onto the A3 towards Hobart, the feeling of remoteness turned into a frenetic convoy of speeding motorists, obviously tired of the beautiful views across Pitt Water and the Derwent River beyond. Fortunately, the wide verges and the array of cycling tracks made my journey more palatable.


Finding the route up to Mt. Wellington was simple. Once at Hobart’s docks, along Davey Street, all I needed to do was continue onto the Huon Highway, the B64, and follow the signs along the way for the next 20 kilometres. The difficult part, of course, was the mountain itself. A climb of two halves, it’s relatively innocuous average of less than 2% over the first 8 kilometres, makes the remaining 13 kilometres a far more difficult proposition than its 5.9% average gradient. From the turn-off at Fern Tree, the road rises sharply and basically stays that way until the summit. 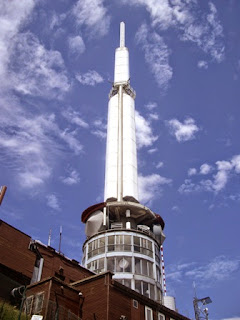 The constant view of its giant concrete tower, housing antenna and transmitters for many companies, including Telstra, reminded me of France’s climb up the Puy-de-Dôme, which was once a regular feature of the Tour de France. Also similar to the route up Mt. Wellington, the most difficult part of the French climb is in the second half. Sadly, the constant curved road spiralling around the volcano like a Mr. Whippy ice-cream is no longer accessible to cyclists.

Now served by a railway for tourists travelling to restaurants at the volcano’s summit, as well as medical and other service vehicles, it’s an example of a once traditional and mythical climb now lost; not just to the French Tour but all cyclists. Having climbed it just once, I feel fortunate to have had the opportunity.

I’ve also heard it said that the second half of the Tasmanian climb is like ascending Mont Ventoux. And I can understand why. With hardly a switchback, up a seemingly dead-straight road, with a seemingly constant gradient, there is absolutely no respite until you reach the very top. And just like most great climbs, you’re rewarded with magnificent views below.

I can’t remember too many better than atop of Mt. Wellington.


'It is by riding a bicycle that you learn the contours of a country best, since you have to sweat up the hills and coast down them'.
Ernest Hemmingway