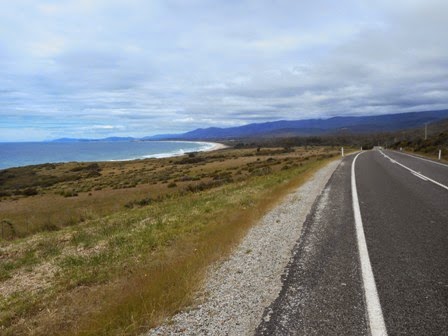 One of the disappointing things about riding more than 120 kilometres in a day is you rarely afford yourself the luxury of sampling the region’s wine and beer; at least along the way. While slugging it out against the oncoming southerly, Roz called into the Iron House Brewery near the aptly named Four Mile Creek. Literally, both their names have that sense of remoteness about them, which she soon discovered, fitted quite perfectly.

From St. Helens, the road hugs the coast for a good deal of the way, providing generous views of the Tasman Sea. But riding into a fierce southerly headwind, I could think of little else than the memory of insufferably drawing closer to Scotland’s northern tip, John O’ Groats. You’d think that finally closing in on your destination, on a relatively flat chunk of road, having travelled 2,000 kilometres the length of England, it would be a very easy and satisfying task. Like the Antarctic is to southern Tasmania, so is the Arctic to northern Scotland. When the mood strikes, both bring violent headwinds, often associated with incessant and heavy rain. 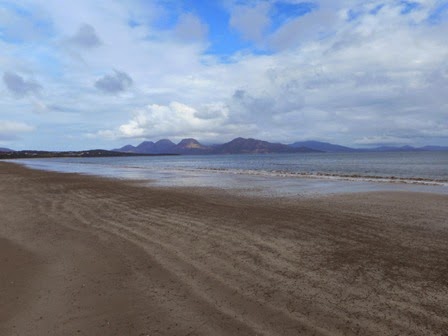 After talking myself into a positive frame of mind – on balance, I only had the wind to contend with – I looked forward to reaching Bicheno and its magnificent views across to another of Tasmania’s gems, the Freycinet Peninsula. Located just a short distance from the township of Coles Bay, it’s known for its granite mountains and white, sandy beaches. It’s also famous for its Wineglass Bay, which having witnessed first-hand on a previous hiking trip, is one of the most beautiful overnight walks you could ever do. But fresh water can be scarce, so just make sure you carry additional supplies if you decide to walk it in summer.

Bicheno itself came into the world around 1803 as ‘Waubs Boat Harbour’, when whalers and sealers used it as a safe haven at the end of a long day’s hunting. Today, it has become an extremely popular tourist destination, primarily due to its spectacular beaches, its close proximity to the Freycinet National Park, and the ongoing pastime of fishing.

Forty-three kilometres from Bicheno was our overnight destination at Swansea. Acclaimed as Tasmania’s oldest historic ‘seaside’ town, it was settled by the Welsh during the 1820’s, and named ‘Waterloo Point’; most likely in some reference to the Battle of Waterloo, just five years earlier. In 1842, it was given its present name of Swansea, after one of its early settlers, George Meredith, obviously not a lover of Napoleonic history, came up with the idea.

Without sounding like a tourist brochure, Swansea does have a bit to offer, especially if you’re into the big W’s like us, walking and wine. It even boasts of a Wool Centre if woollen garments are your passion. During our short stay of two nights, Roz and I found time to walk along Nine Mile Beach to the mouth of the Swan River, which afforded us close views across to the Freycinet Peninsula, before visiting a couple of local wineries which fuelled our delight for basically anything bearing grapes or fruit.

Over our seafood dinner, with 180 kilometres awaiting me the next day, nothing could have gone down better than my glass of Iron Wood Brewery Porter that Roz bought for me back in Four Mile Creek. Taking my final mouthful, with even more flavour swirling around the bottom of the glass, I’d totally changed my mind. Neither place felt that remote after all.