I particularly enjoyed the first hour’s ride from Swansea. The road stayed true to the coast until it gradually turned inland towards the twin towns of Triabunna and Orford. Busy fishing and tourist-towns, the former is the staging point for visitors who catch the ferry across to Maria Island. Once a convict settlement, Maria Island is today a national park, with no permanent inhabitants; just the few hundred hikers and sightseers who make the trek to its shores each year and the handful of park rangers stationed at its lone small town of Darlington. 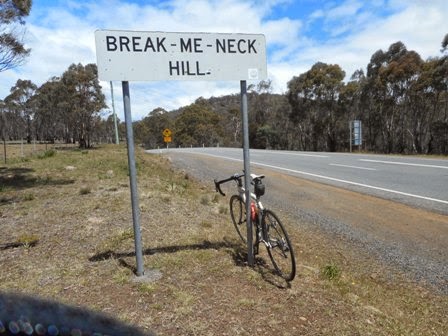 Heading further inland, the road, as it usually does when it leaves the coast, began climbing over a series of ‘small’ hillocks, each about 300 metres in height. Only a few months since I was photographing the likes of Passo del Mortirolo, Stelvio and Gavia, here I was passing signs like ‘Break-Me-Neck Hill’, ‘Bust-Me-Gall Hill’ and the perhaps somewhat dubious, ‘Black Charlies Opening-Elevation 296m’.


With still 70 kilometres to travel, Roz and I met for lunch at Sorell, an important cross-road between Hobart, Port Arthur and Tasmania’s east coast. Close by is the tourist-town of Richmond, which boasts the oldest bridge in Australia still in use. Completed in 1825, around the time of the town’s first settlement, it was another historically renowned construction built by convicts of the day. Until 1866, when the causeway from Sorell was built, Richmond was the only link between Port Arthur and Hobart.

Only 25 kilometres from Hobart, Sorell’s roads were the busiest I’d experienced since riding through Launceston four days earlier. Made worse by the end of the school day, the Arthur Highway was streaming with fast-moving cars, until most turned off onto the C334, leading to Pittwater Bay and the growing townships of Lewisham and Dodges Ferry. Further along the road was the small fishing village of Dunalley that was ravaged by bushfire in the summer of 2012-13. With the fires spreading further down the highway towards Murdinna, many people’s homes were lost, as well as the local school and Police Station, though miraculously, without loss of life.


Standing in between Murdinna and Port Arthur is the narrow isthmus, Eaglehawk Neck, which connects the Tasman Peninsula to the mainland. Only 30 metres wide at its narrowest point, it was used as a natural deterrent by the British in the 1830’s to prevent convicts from escaping. Heavily patrolled by soldiers, a line of purposefully-starved dogs were chained to posts positioned across the neck. While many made the attempt to escape via the narrow gateway to ‘freedom’ and for that matter other natural routes, such as the sea, few survived, while those that did, were brought back and further punished.


Originally set up as a logging camp, using convict labour to produce cut logs for government projects, Port Arthur became a punishment ‘machine’ for repeat offenders from the Australian colonies. While some convicts experienced better living conditions and opportunities than they would have otherwise had back home in England, many were treated cruelly by today’s standards and became broken men; hence, the presence of the Lunatic Asylum, built in 1868.


Of course, you didn’t have to steal a chicken or a sheep to be sentenced to transportation to Australia. In any case, the more serious crimes, such as rape, murder, and homosexuality up until the 1850’s, were dealt with by the death penalty. Others were transported for being an accessory to homosexuality, for being an orphan, an Irish rebel, a woman with loose morals, an aborigine, a black South African or even a Chartist.

If you weren’t aware, a Chartist belonged to a large group of Englishmen who drew up a list of changes they wanted made to the double-standard political system of the day. Interestingly, one of the more fascinating displays we saw at William Smith O’Brien’s Cottage – Smith O’Brien was a member of a revolutionary group which fought for Ireland’s independence – were the following requests.

* The right of all men over the age of 21 to vote.
* Voting to be conducted secretly by ballot.
* The creation of 300 constituencies based on equal numbers of electors.
* Annual parliamentary elections.
* Abolition of the requirement of a Member of Parliament to own land or property.
* Payment of a wage to all Members of Parliament.

For such outlandish proposals, many of these men were transported to Australia!