Held every year in Bright, on the Australia Day weekend, is the Audax Alpine Classic. For me, as with most cycling enthusiasts, it's a wonderful opportunity to climb some of Victoria's formidable peaks, to catch up with like-minded friends and to savour some of the region's palatable wines and exotic beers.


My mate Lore and I have been making the journey for umpteen years now and despite the heat, hills and hurt involved we keep coming back for more. With its distinct French flavour, characterised by its moustached monsieur and audacious mademoiselle who mischievously mingle through the throng of cyclists lined up behind the starting line, it is by far the most creative and organised event a recreational cyclist could ask for.

Departing around 6.30am from Bright, the Alpine Classic 200  habitually includes four climbs, the first and easiest being the up to Tawonga Gap. A 14-kilometre climb, averaging 3.9%, it doesn't bite, if it really bites at all, until about 5 kilometres from the top. That's about the point when the few hundred cyclists who headed off about 30 minutes earlier begin to gradually spread out in small clusters along the road.


Once over the summit of Tawonga Gap it doesn't take long before the strung out cavalcade of cyclists reach Mount Beauty and the beginning of the second climb up to Falls Creek. An ascent of almost 30 kilometres, its average gradient of 3.9% belies its difficulty. The series of short downhills over the first half of the climb offer no forewarning of its final 10 kilometres of continual steepness in the unprotected heat. By now, those who have made it to top are on their frenetic sprint down the mountain, while those (like me) continue their silent struggle, heads half slumped and hoping it will soon be their turn. 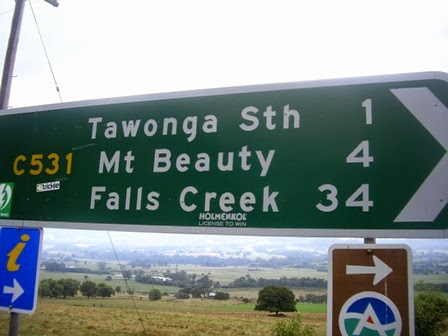 With only 60 kilometres completed but almost half the climbing done, I made the most of the break up the top of Falls Creek. Supported by a host of volunteers, the only danger of the amount and variety of food served was the time it took to eat it before getting back on the bike.

With the series of short uphills on the way back to Mount Beauty, the descent (as it often does) took longer than expected. A short but steady climb back to the Tawonga Gap Road and you're immediately in the thick of you're third ascent of the day The climb up Tawonga Gap from its alternative side is significantly more difficult. A steady near-8 kilometre ascent with a 6.3% average gradient, there seems little variation, withstanding its 3 hairpins, from the very bottom to the very top.

My favourite section of the ride starts the moment I reach the top of the climb. A long and speedy descent to the Great Alpine Road, the tiredness in my legs soon disappear and I find myself turning the pedals (when required) like a sprinter on my way to the finish line. Sadly, the feeling is only short lived, soon replaced by thoughts of the final and most difficult climb of the day, Mount Buffalo.

By the time you reach the first water stop on the way up Buffalo you know if the next 20 kilometres are going to be, at best, a simple incessant turning of the pedals or at worst, an energy-sapping exercise where there's nothing left in your legs but pain. I've experienced  both but climbing Mount Buffalo is a much easier and more pleasurable experience when you're feeling fresh at beginning the of the day.  No heat, no build up of tiredness, a place where only the gradient is the same.


While the peloton heading up Tawonga Gap in the morning was strung out in small groups along the road, the afternoon ascent up Buffalo was for many, a lone affair; save for the occasional passing of cyclists along the way. It becomes a slow sojourn up the mountain, with you only friend being the occasional canopy of trees, the kilometre of road that gently eases off from the climb's 5.6% average gradient and the remaining water stops along the way.

Like a dose of morphine, the pain quickly disappears the moment you get off the bike at the top of the climb, Buffalo's Dingo Dell. With 35 kilometres still left to travel, it's just a matter of safely descending down the mountain and negotiating a few short-lived sections of uphill along the way.

Crossing the long-welcomed finish line back in Bright, there's always a sense of satisfaction, even short-lived euphoria, for having completed the ride. A hive of activity, riders are already sharing their experiences, many over a flavoursome beer at the Bright Brewery, just metres away, while hundreds of spectators still eagerly wait for their friends or family members to cross the line.

The town of Bright emerges a much quieter place the next morning, Gradually, the road signs disappear and the tents are packed away. Finding a car park is not quite the problem it was on the weekend. For the meantime, the town slowly returns to its normal self, at least until the next event comes its way.