Our final day in Tasmania involved a relatively easy ride between Stanley and Devonport. Not quite the euphoric end to a long journey as heading down Paris’s Champs-Elysées towards the Arc de Triomphe or through Solsona’s ‘old town’ in Spain, it would nevertheless be satisfying to have circumnavigated much of Australia’s most southern state. Ironically, having cycled more than 1,400 kilometres over 63 hours, I hadn't even experienced one puncture.

Retracing my steps along familiar road, between Stanley and Wynyard felt much easier than the afternoon before. A Saturday morning, most of the traffic was heading in the opposite direction, while the recurring river and coastal views on my left continually enticed me to get off my bike, at the least to capture a photo. One such place was the beach at Somerset, lying approximately half way between Wynyard and Burnie. Another was the rural landscape around Flowerdale, which with its undulating hills and green pastures, intoxicatingly reminded me of cycling through the French countryside. 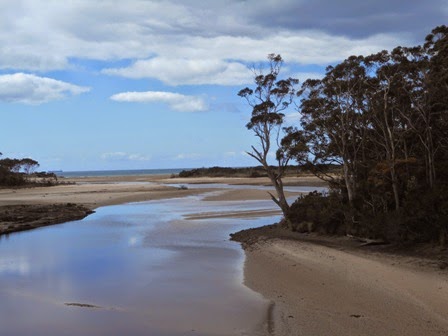 We tend to take the everyday beauty of our own environment for granted. Where I live, on Melbourne’s Mornington Peninsula, the stunning views of the coastline and distant peaks from its’ highest tip on Arthurs Seat, are just as magnificent as many I’ve seen in Europe.

The small township of Somerset is also renowned for its 'Two Oaks Café', which we conveniently discovered by accident. Around lunchtime and with little else seemingly on offer, Roz and I happened to meet at the café, which is located on the same site as its caravan park. A handcrafted building made of local farm rock and native timbers it provided a tantalizing array of affordable meals. Even more impressive were its outdoor gardens which had a distinct European feel about them. The café’s entrance in particular, was enshrined by many beautiful deciduous trees, which despite being summer, still a long wait before nature works its art, were more than noticeable in their present form. 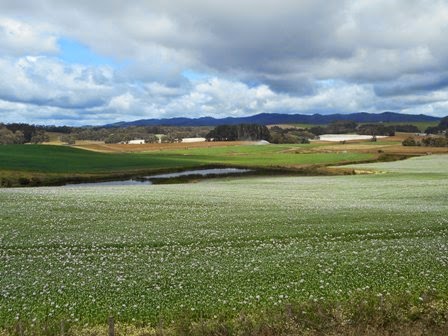 The Bass Highway – being a highway it sounds more threatening to cyclists than it really is - continued to follow the coast. Even better, an alternative and obviously less travelled route, between Burnie and Ulverstone, kept to the shoreline, along with the old and now-disused railway line. 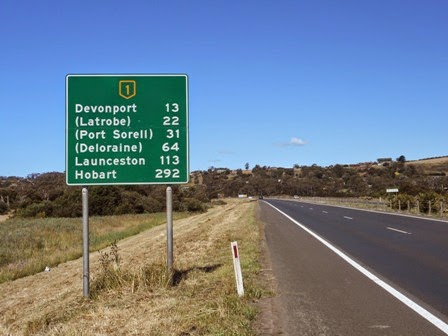 Only 12 kilometres west of Devonport, the former timber-town of Ulverstone has gradually gleaned itself to become more of a tourist destination, while still staying true to its roots. As I pedalled the few remaining kilometres back into the drowsy city of Devonport, I reminisced over the variety of places we'd seen for the first time. The other impression I gained about travelling around Tasmania – having visited the state many times during the past 30 years – is that it is slow to change. But aside from its rugged beauty, that’s what  people seem to love about it; part jewel, part anachronism in a rapidly changing world.

Tasmania also tells a story of Australia's European past, and in many respects, a brutal and cruel one. As I said earlier, there wasn't the euphoria of past cycling trips; it was just relaxing, satisfying and laid back. That's Tasmania for you and you couldn't ask for more.

“Nothing compares to the simple pleasure of riding a bike”.