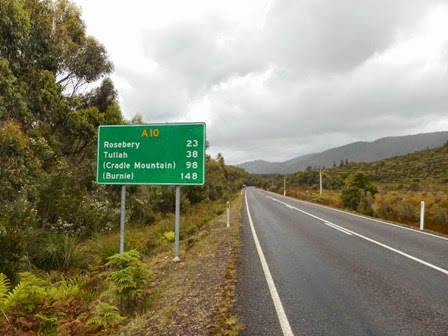 Less than a four-hour ride, my journey between Strahan and Tullah was as I anticipated; quiet, remote and abundantly scenic. Just as predictable was the weather; a strong head wind, which once it disappeared, was replaced by constant, heavy rain. Despite the conditions, the road (the B27) towards Zeehan, was bereft of motor vehicles, let alone cyclists, and stayed that way until it re-united with the A10 highway.

A shadow of its glory years, Zeehan, or ‘Silver City’, as it was called during the first decade of the 20th century, is least worth a short visit. The now-restored facade of its Gaiety Theatre provides a striking glimpse of what the auditorium would have been like in its heyday. It’s also noted for its West Coast Heritage Centre and Pioneers Museum, which house interesting displays based on the area’s indigenous, pioneering and mining past. But as I said, the once-mighty mining town is not quite the attraction it once was in its former days. 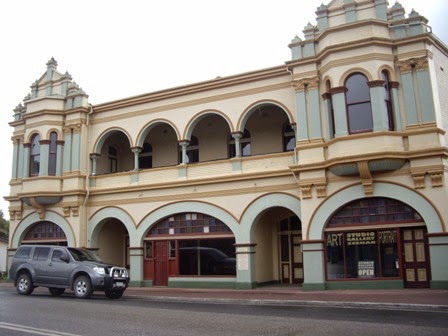 Twenty-four kilometres further along the A10 lies the mining town of Rosebery. Producing more wealth than any other mine along the West Coast, its Hercules mine has generated copper, gold, lead, zinc and silver to the tune of an estimated 8 billion Australian dollars. Boasting its own golf course and nearby Montezuma Falls, Tasmania’s highest waterfall, the town’s main street is far-more lively than its more southern neighbour, Zeehan. Tucked into the shadows of Mount Black, it involves a steady, but relatively short climb out of town before a leisurely ride into Tullah.

If budget accommodation is your favoured choice then Tullah’s Lakeside Lodge is for you. Despite the rather claustrophobic room, it served a wide variety of Tasmanian beer, we had access to the cricket via the lounge’s wide television screen and our evening meal was palatable. Then again, so is just about anything when you’ve worked up an appetite.

With a handful of shops, a post office, service station, its own cricket club and a population of less than 300 people, you’d hardly call Tullah a thriving metropolis. But it is peaceful, relaxing and worth an overnight stay, especially if you’ve ridden more than 1200 kilometres on a bicycle. Nestled along the edge of Lake Rosebery, the former mining town could only be reached by rail - a two-feet gauge tramway - up until the early 1960’s. Today, the ‘Wee Georgie Wood’ steam locomotive still runs on a weekly basis, 1.6 kilometres from the middle of town.

With just two days remaining, I was especially looking forward to arriving at Stanley, and its alluring ‘Nut’, the solidified lava lake of a long-extinct volcano. That meant more than 170 kilometres of varied road to cover the next day. It was to be somewhat long, scenic, interesting, and in part, filled with unexpected road conditions.