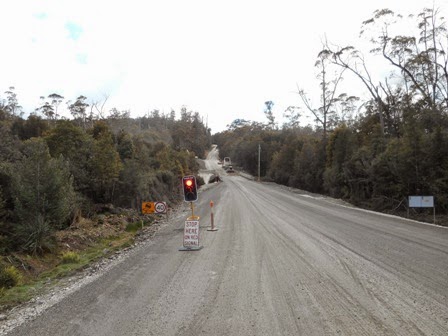 It took only a handful of kilometres along the A10, the Murchison Highway, to be reminded that it wasn’t until the 1960’s before a bitumen road connected the rest of Tasmania with Tullah. A little more than half a century later and the route was knee deep in its own road works. The bitumen was soon replaced by a sea of gravel, followed by a seemingly endless bed of sand, which swallowed my slender 23mm tyres like a string of spaghetti.


Waiting patiently for the portable red light in front of me to turn to green, I contemplated the difficulty of the steep incline a few hundred metres up ahead. Still just a road of wet sand it didn’t instill me with much confidence of staying on the bike. Following the worn tyre marks along the road as if I was ruling a straight line, I turned my pedals ever so cautiously, waiting for the moment I’d be forced to come to an abrupt standstill. While the sand continued, as did the intermittent road signs that inconveniently halted the handful of cars travelling in each direction, I was soon tentatively creeping over the summit and down the other side. Though with almost 150 kilometres still to travel, I felt relieved that I’d soon, once again be on a road surface more suited to bicycle tyres.


From the intersection with the C132, which takes you to Cradle Valley, the northern doorway to Cradle Mountain Lake St. Clair National Park, the Murchison Highway takes on a more welcoming demeanor. A quiet bitumen road, and gently downhill for most of the way, it became an enjoyable two hours of riding. Along the route, I met Roz for lunch at the small rural settlement of Yolla, which is less than 20 kilometres from the Wynyard, on Tasmania’s north coast. Agriculturally rich, it supports the dairy, sheep and beef cattle industries in the area, as well as forestry and mining.


Ironically, the Mount Hicks secondary highway (from Yolla), was probably the most beautiful stretch of road I travelled along over my entire journey. I say ‘ironically’, because once back on the Bass Highway, I’d be travelling more than 200 kilometres (towards Devonport via Stanley) on one of the busiest roads in the state.


A Friday afternoon in summer and the road was teeming with traffic, much of it heading towards Stanley and Smithton, on Tasmania’s rugged north-west coast. Closely hugging the coast for the last 30 kilometres, Stanley’s volcanic plug, ‘The Nut’, was constantly in view. First sighted by Bass and Flinders on their historic circumnavigation of Tasmania, the top of The Nut State Reserve can be accessed by chairlift, or if you’re game, a steep walking track immediately above town. The track reminded me of the harrowing final kilometre, of 17%, up the Kitzbüheler Horn, one of the steepest climbs in the Austrian Alps. But if anything, the Tasmanian walking track seemed much steeper. Despite its meagre population of less than 500, the small town is a main fishing port and popular tourist destination, as testified by the totally booked-up accommodation at our overnight stay at the Stanley Hotel.

With only one day remaining before boarding the ferry back home to Melbourne, we wished we could have stayed longer. It nevertheless, is on our bucket list to return one day.

“Life is like riding a bicycle. In order to keep your balance, you must keep moving.”
Albert Einstein