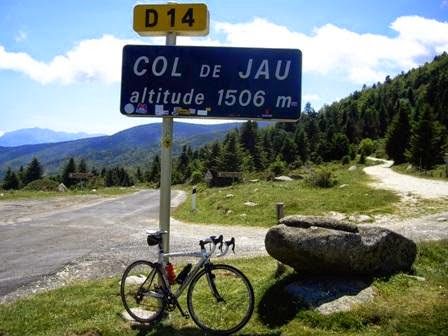 The D107 from Niort-de-Sault through the Gorges du Rebenty made up for all the climbing I’d done over the past few days. A winding, narrow road with a series of chiselled-out tunnels, it reminded me of the route from Guillestra towards the Guil River and the Col d’Izoard, in the French Alps.


The Col de Jau, a 75-minute climb (for me), from the small village of Sainte-Colombe-sur-Guette, follows the beautifully flowing L’Aiguette, for most of its 13.4-kilometre journey.  It was on my way down the opposite side that I met another cyclist. It was for the second time in a few days. His name was Mick and he was from Blackpool, England. He was on his second journey through the Pyrenees, following the Route des Cols, which links the Atlantic with the Mediterranean, via 34 mountain passes. We’d previously met a few days earlier at the summit of the Col de Mente, which we both agreed was a short but brutal climb. With just a few days remaining of his near-thousand-kilometre trek, he was looking forward to meeting his wife at Argelès-sur-Mer on the shores of the Mediterranean.

Continuing down the mountain along the D118 towards Axat, I reached the Gorges de Saint Georges, a stunning but potentially dangerous stretch of narrow, winding road, with a granite canopy not far above. It was hardly the most desirable place for heavy vehicles, let alone a Winnebago. But that's what came wending its way along the road, slowly feeling its way between the gorge’s granite wall and the concrete barricade less than a metre from the opposite edge. As seconds turned into  minutes, a line of cars quickly built up behind the cumbersome motor home, their drivers showing signs of running out of patience.


Suddenly, there was a loud, sustained blast of a siren; a huge cement truck, with a French number plate, coming from the opposite direction. Its size and the length of its blast suggested there was no way it was going to retreat from its position of strength. It had size, weight and above all, territory on its side. The driver of the Winnebago had little choice but to meekly and rather awkwardly back up, as did the long line of cars behind him. A rather comical sight, I was glad I was merely a spectator. Probably a common occurrence, I also hoped that a similar fate hadn’t befallen Roz in our hired VW Polo.

Another climb in what was fast becoming the Pyrenean foothills, was the Col de St-Louis. Though slightly harder than expected, due to the stifling heat, it was only 6 kilometres in length, averaging somewhere between 7 and 8%. As I've learned from climbing Arthurs Seat throughout the years, it doesn’t matter how short a steep mountain climb is, you're made to work a lot harder than usual. The view east, signifying the end of the Pyrenees, resembled a skeletal backbone as it tapered down towards the sea.


Smaller cols are not only easier to climb but there's generally more solitude as well. Grazing cows, beautiful scenery, and perhaps another lone cyclist are all you're likely to see on your way to the top. With my sights now set on heading towards Paris, I would nevertheless regret leaving this part of the Pyrenees so soon. While less of an attraction to cycling tourists, it is a very beautiful part of the world.