An important feature of staying in French villages or small towns is you don’t need to set your alarm to wake you up early next morning. Most have a clock tower, indeed with a very loud clock bell, that chimes.,on cue, every hour of every day. Pont-de-Salars was one such location. While less intrusive than the alarm on my mobile phone, the result was exactly the same.

Back home, especially Sunday mornings, it's a time to sleep in. As I first open my eyes I check it in my head. 'Yes, today really is Sunday and I don't have to go anywhere or do anything'. When finally prepared to greet the day, I get out of bed, stumble two metres, open the curtains and hopefully feel the sunshine pouring in on me. If not, it's back under the covers with a slap of the snooze button. Cycling trips on the other hand, don't often afford me that luxury; you disquietly accept the weather, the distance and the terrain in front of you for what it is, and simply get on your bike and pedal. 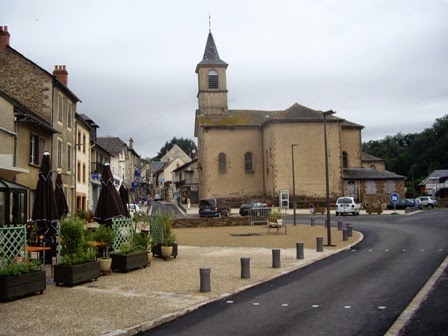 Another advantage of travelling through small towns and villages is the type of roads that connect them. They are generally quiet, peaceful and devoid of traffic. The D523 between Pont-de-Salars and the small farming town of Laissac was one such road. Other than a constant descent - which can never last forever - it offered as a good a start to a day's cycling as you could wish for. The road soon sidled along the Reservoir de Pont-de-Salars, the early morning mist sitting on the water, until eventually replaced by luxuriant forest. 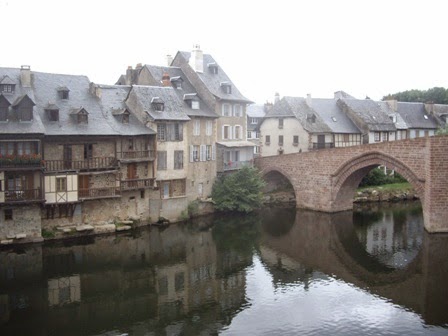 The grey stone dwellings and walls along many of the places I passed through, once again reminded me of the Coast to Coast walking route across northern England, particularly Keld, which marks the halfway point. As well as the austere walls, reminiscent of earlier times, the other striking similarity was the lack of obvious places to eat. At best, just a bar where you can buy a beer or a soft drink, hardly enough to replenish an ageing cyclist with another 80 kilometres to travel. While the temperature still hovered around 12 degrees by early afternoon, it was nevertheless perfect riding conditions so long as you kept pedalling, far less oppressive than the energy-sapping heat of southern Portugal and the French Pyrenees. 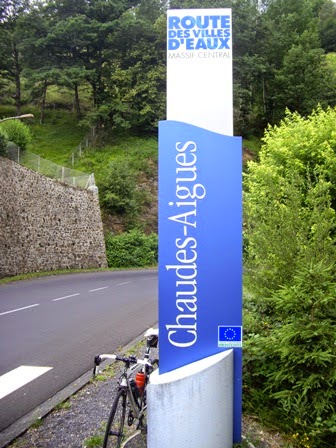 The spa town of Chaudes-Aigues heralds the southern border of the Central Massif, a region of France that I was champing at the bit to discover for myself. 'Would it be anything like le Grand Massif or even the Pyrenees?' Beautiful, quaint and in parts quite high, it was nevertheless, different in its own right. A characteristic covering of rounded hilltops or mounds, it reminded me of green-coloured bubbles perched on water.

But the most prominent and challenging of them all, the Puy de Dome, still lay a day's ride ahead. A classic mountain, hill or dormant volcano (take your pick), belonging to the French Tour's past, it was something I'd curiously waited to climb throughout the entire trip.