Less than 300 kilometres from Paris, the D909 begins its meandering journey north from St. Flour. Perched atop of Auvergne's highest volcanic outcrops, the charming old town provides magnificent views of the surrounding countryside from its medieval walls high above its twin new town some 80 metres below.
Despite the constant whine of the passing traffic along the autoroute close by, it was nevertheless a relief to have the road I was on all to myself. It took but a few moments to wend my way through the tiny hamlet of Vieillespesse. It seemingly appeared little more than a few houses and farms, as well as the obligatory cow along the road that remained unfazed by the occasional car or tractor that went by. Often characteristic of villages and small towns throughout the French countryside, was the small cemetery I passed on my way out. The very last memorial you see, it seems a constant and fitting reminder by the country's rural folk that those who have passed away are not lost; they are almost as much a part of their lives as the living themselves. 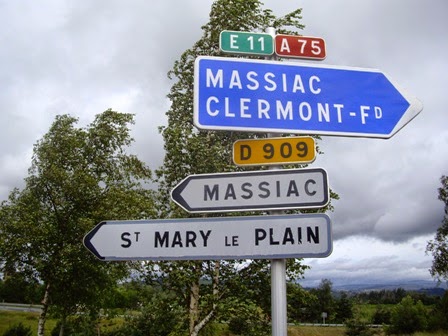 An easy 35-kilometre ride to the attractive valley town of Massiac, I was amidst lush green countryside and in the distance, white windmills churning harmlessly in the gentle breeze. Along the same quiet road I was the beautiful Vallee l’Alagnonnette, its gentle downhill slope transporting me all the way to Lempdes-sur-Allagnon, another small medieval town lying in the heart of the Massif Central. The narrow road led me under numerous railway bridges which, at least, seemed in keeping with the beautiful surroundings; unlike its much speedier and uglier rival, the motorway. While providing a viable form of transport, the railway line seems to blend in more with its surroundings, forming an unobtrusive link between the present and the past. 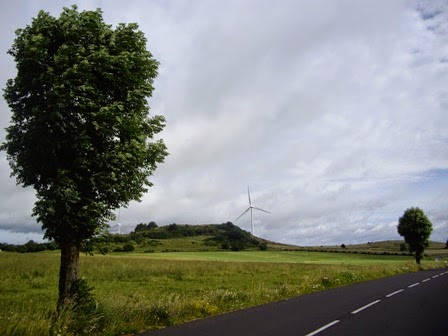 Fast approaching the more bustling town of Issoire, I reluctantly left the D909 for the supposed equally tranquil secondary road, the D996. Seemingly harmless in type, it quickly announced itself as a hotbed of traffic, decorated with alternate route signs and traffic lights that created mayhem for motor vehicle drivers and cyclists alike. Funny, I didn't imagine it that way when I was pouring over my route map the night before. Eventually, after a few kilometres of congested bitumen, amidst impatient drivers, the road returned to the something I’d imagined, and hoped, it would be all along. 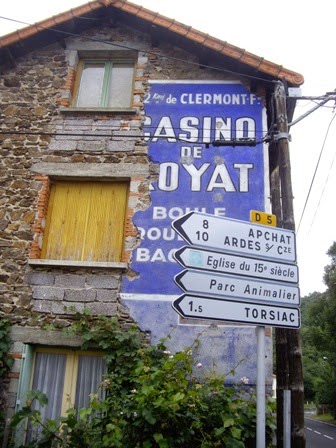 If the D996 was something of an unexpectedly bad, though fleeting experience, finding our accommodation at the Logis Le Chatel, in Royat, turned out to be an absolute nightmare. Made worse by the beginning of France's school holidays, finding the logis took more time than almost all our other  places put together. A plethora of D roads eventually delivered me into heavy Friday evening traffic, somewhere close to the urban sprawl that connects Royat with its larger neighbour, and popular Tour de France destination, Clermont-Ferrand.


It wasn't until heavily exhausting an array of locals and out-of-towners for directions that I finally, frustratedly, ventured into a pharmacy. The only thing I needed more than a headache tablet was an English speaking voice with local knowledge. It came in the form of a rather affable fellow who kindly instructed me to head along the road I was on for about a kilometre, before turning right at the next main intersection and proceeding for two more kilometres down the road. "That’s where you’ll find the Logis Le Chatel", he said, with a rather amused look.

As I tiredly rolled my way in the right direction, and with the kindest gradient you could imagine, I soon found out he was right.