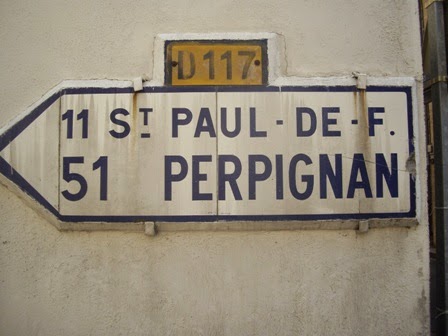 This morning’s ride was noticeably undulating, far more relaxing than the steep ups and downs of the Haute Pyrenees. Alone, surrounded by hay bales and vine plantations as far as the eye could see, it felt like I was the only thing moving in what was a beautiful stillness.

﻿﻿﻿﻿﻿﻿﻿﻿﻿﻿Along the D10, just out of Massac  the views along the road opened up even more. The white rock that had dominated the landscape along the route from Axat to St-Paul-de-Fenouillet had now become tinged with red; as was the soil and the red terracotta rooftops of the village houses, enveloped in shades of green.

Nevertheless, still out in front of me were a series of small cols, a continual reminder that there's much more to cycling in the Pyrenees than its twin giants, the Col du Tourmalet and the Col d'Aubisque. Despite not seeing one solitary cyclist along the way, I imagined this part of France to be a cycling haven. Studded with winding secondary roads, and with little traffic passing by from either direction, it was the kind of environment long-distance riders in particular, really warm to. ﻿﻿

Once over the last of the seven climbs, ranging from 372 to 954 metres, the view ahead opened up in front of me like a child’s Christmas present. Before me lay a green, sprawling valley of vine plantations, punctuated only by the winding road through its centre and beyond it, the rounded peaks of France’s Central Massif.


En-route to our overnight accommodation at Lacaune, I felt reminded of travelling through parts of Portugal. The only difference was that instead of crossing nothing more than a bridge, a sign and a dry river bed, I became a witness to steadily moving streams that were seemingly full with life. Much of France is just like that.

“Ride as much or as little, as long or as short as you feel. But ride”.
Eddy Merckx, Belgian road cycling legend
Posted by markkrieger at 01:01