Directly south-west of Grândola stands its moderately taller namesake, the Serra de Grândola range. Quickly travelling along the seven kilometres of narrow, deserted road, more out of curiosity than anything else, I was soon approaching its 275-metre summit. Wrapping itself around the lonely tor like a baby python its eventual steepness belied the climb’s 2.3% average gradient.  Once over the top, the road descended towards the N261 and the city of Santiago do Cacém, perhaps best known for its castle, which like many medieval fortifications throughout Portugal and Spain, repeatedly exchanged hands between the Christians and the Moors.

Though left with more than 80 kilometres to travel, time passed quickly. I was now cycling close to the CostaVicentina, a magnificent stretch of coastline tucked into the south-western corner of the country. Known for its breathtaking cliffs, golden beaches and balmy year-round climate, the Algarve is Portugal’s most popular tourist destination, but by some quirk of fate its west coast is far less congested. Even the busy autoroute, laconically linking the capital, Lisbon, with the country’s south-western coastline, abruptly terminates at the port of Sines, a long way north of the Algarve-Alentejo border.

The small village of Odeceixe contentedly sits on the steep hillside above the estuary of the Ribeira de Seixe, its banks dividing the two regions. With not much more than a thousand local inhabitants its numbers swell over the summer period with the arrival of surfers, walkers and campervanners who are enticed by its magnificent beach and lively atmosphere.

Less than 20 kilometres further south, along the N120, was our overnight accommodation in Aljezur. With its light blue awnings and whitewashed walls, typical of the Moorish influence in the region, our only regret was we weren’t there long enough. Nestled in a broad, fertile valley, Aljezur’s ‘new’ town came about through a malaria epidemic during the 18th century, when many inhabitants of the original town, fled over the other side of the river (the Rebeira de Cerca) to start anew.

But like most of the remote places throughout Portugal, and Spain for that matter, it’s its ‘old’ town, built into the side of a hill that holds most attraction. No sooner across its small bridge and you’re met by a web of narrow cobbled lanes and red-tiled rooftops, seemingly stacked layer upon layer most of the way up the hill. At its summit stands one of Aljezur’s most popular attractions, the remains of a 10th century Moorish castle. Originally built to protect the ancient river port that once provided a link with the sea, it was one of the last Moorish strongholds to withstand the might of the Christian re-conquest during the 13th century. Today, people come to visit its partially restored ramparts, not only for its history but for its panoramic views across the rolling countryside towards the Serra de Monchique, the source of the town’s water.

The old town’s main street runs parallel to the river, with numerous small cafes hugging both sides of the bridge. Literally within 60 seconds of this busy location was our accommodation at the Amazigh Hostel. Here, over dinner, we met a group of Spanish cyclists from Madrid. Four of them, each probably somewhere in their late forties, had travelled to the south of Spain, before venturing west along the southern shores of the Algarve. Their ultimate destination was Porto, approximately 500 kilometres to the north.

Travellers, we already had much in common.  We, of course, talked about where we’d already been, where we were heading, Spanish climbs, even the virtues of particular cycling routes. They seemed to prefer the busier coastline of southern Spain, while I’d chosen a more precipitous route; as much for the remoteness of the less-travelled roads as the mountains themselves. 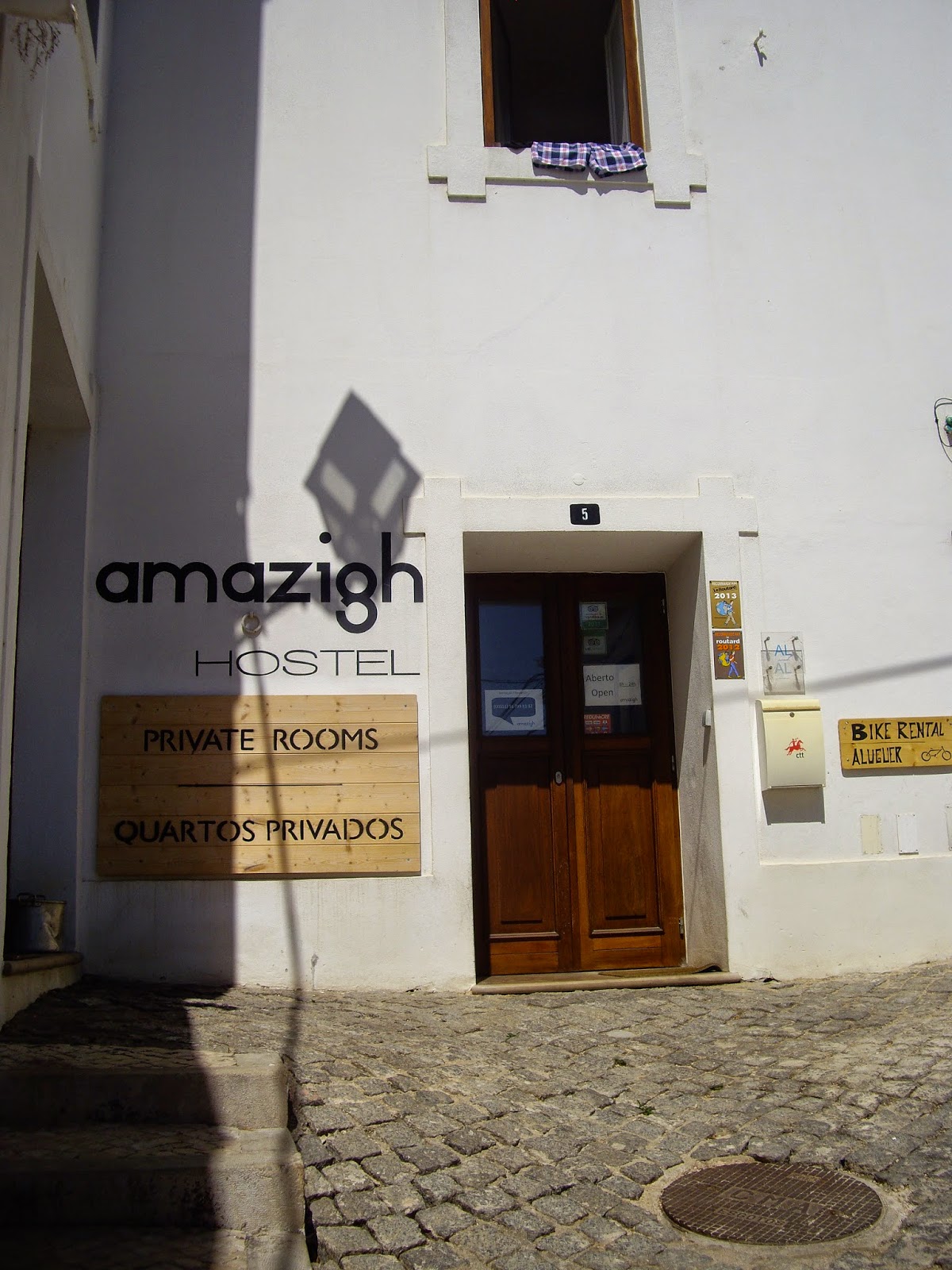 Despite the clumsy banter, the conversation drifted along late into the evening. Viewing each other’s photographs, Roz and I were given a window of some of the places we might encounter in the next few days. Handed one of their photos of the modern bridge spanning the Río Guadiana, my thoughts drifted towards the boat crossing into Spain. Spoiled by southern Portugal’s combination of flat and undulating terrain over the last few days, in less than a week I’d be getting a sharp taste of heat and altitude along Spain’s Sierra Nevada.

Only minutes before midnight, we bid each other farewell. They, like us, were heading off early next morning. As it turned out, they much earlier than us!

One of the best things about travelling, whether I’m cycling or not, is I always look forward to the shared experiences between perfect strangers. Seemingly so different at our first meeting with others, we often part with the feeling of having much in common than we might first have thought.  All it takes to get to know others is to bother to scratch beneath the skin.

It is by riding a bicycle that you learn the contours of a country best, since you have to sweat up the hills and coast down them.