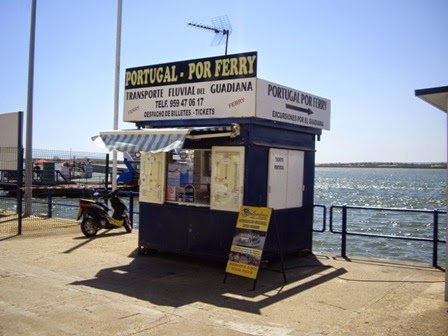 With 60 kilometres left to travel and initially along busier roads than their Portuguese counterparts, I began to muse over the time my tired wheels might roll into Trigueros. Eight pm seemed the best I could hope for but fanned by a tailwind along a straight stretch of road, time and distance seemed to move as one.


Travelling along the N-431, I was swiftly passed by a small group of young cyclists. With their lithe frames, sinew calves and wearing more advertising than you’d be exposed to in a five-minute commercial break, they were clearly more than just your week-day cycling rambler; like me. In a forlorn attempt to stay in their slipstream, I picked up my cadence. Despite the notion that my ‘sustained’ 35-40 kilometre-per-hour speed would help me arrive in Trigueros even sooner, it was a mere matter of moments before they were just a blur in the glistening sunlight.


﻿
﻿﻿ Still buoyed by the wind at my back, it wasn’t long before I began passing signs towards Huelva, to the south. Known more for its copper mining and the departure of Christopher Columbus’s maiden voyage to the Americas, than its architectural splendour, it didn’t quite make it onto our bucket-list of Spanish places to visit. Its mineral wealth, largely extracted from the Rio Tinto mines has certainly attracted all-comers over the centuries, from the Romans to the British, who began large-scale mining in the area during the latter part of the 19th century. What’s more, there was even an abundance of British and German spies during the 2nd World War, when activities like the reporting of British shipping in the Atlantic were commonplace. ﻿﻿﻿﻿

But as stated earlier, the bustling port city just wasn’t for us. Situated on the confluence of the Odiel and Tinto rivers, its outer industrial sprawl and the convoluted network of major roads leading to it, was enough to persuade us to opt for a more remote location. Later that evening we were glad we did.