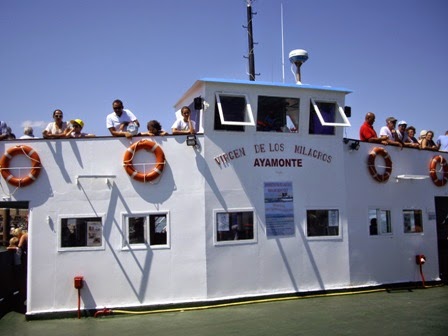 With valuable time to spare, Roz and I strolled along Loulé’scolourful ruas one last time, before mulling over our maps at one of the numerous cafés sprawled out on the pavement. Reaching the ferry at Portugal’s southeastern-most city, Vila Real deSanto António, involved a 60 kilometre ride, before another 60 to our overnight accommodation in Trigueros. An anxious wait, it was a little after two before my bicycle was ready. But ready it was, and once having thanked the mechanic for his prompt and benevolent service – he charged me a mere 39 euro for the normally expensive part, and his labour - I was soon, back cycling along the N270 towards the town of Tavira.


The Algarve’s most populated settlement during the early 16th century Tavira was another port town that benefitted from the Age of Discoveries. Situated along the Rio Gilão, and just three kilometres from the coast, it provided a base for many of Portugal’s expeditions, transporting produce such as salt, dried fish and wine across the Atlantic. However, struck by similar circumstances as those befalling other settlements along the southern coast, the then ‘city’ steadily declined over the ensuing centuries, until worst of all its near-destruction during the earthquake of 1755.

Rebuilt during the 18th century, the town’s buildings, with their stark-white walls and polished azulejo tiles, mirror a Moorish past that lasted 500 years. While the more recent demands of tourism have brought with it a changing landscape – things like modern shopping centre developments, a stream of new hotels and apartments, as well as a steady influx of golf courses, which have popped up almost as quickly as the grass it relies on – its Old Town has stayed true to its roots.


Enter the portal of Dom Manuel and you soon encounter the 13th century Igreja de Santa Maria do Castelo.  Easier to find than to articulate, it was by all accounts, built on the site of a former mosque. Just as historically impressive, it contains the tomb of Dom Paio Peres Correia – a renowned conqueror of the Reconquista – and his Christian knights, who were slain by the Moors. Seriously damaged by the earthquake, along with many of the town’s 20-plus churches, it too underwent repair during the 18th century.


Connecting both sides of town across the Rio Gilão, is the Ponte Romana. A seven-arched pedestrian bridge, it owes its origin to Roman times, when the road linked Tavira with the settlement at Baesuris (now Castro Marim), 23 kilometres to the east.

Following a similar route, and no doubt along a more comfortable road, the N125 heads, almost unswervingly, towards the border-town of Vila Real de Santo António, just 4 kilometres south of Castro Marim. A relatively late starter as present-day Algarve towns and cities are concerned, it wasn’t actually established until after the 1755 Lisbon earthquake. Only two years in the making, it provided the easiest access, via ferry, to and from Spanish Andalusia, before the construction of the Guadiana International Bridge (in 1991), further upstream.


Not much more than a two-hour ride from Loulé, I was soon sitting comfortably on the deck of the ferry, well before its scheduled departure at 5pm, Spanish time. A pleasurable and inexpensive 20-minute ride across the Rio Guadiana’s calm waters towards Ayamonte, it nevertheless felt a little unusual being carried by anything other than an uncomfortable leather seat on two wheels.