Possibly the most arresting white-walled town in Andalusia, Arcos de la Frontera stands indomitably above the luxuriant plains of the Rio Guadalete. Declared a National Historic Monument in 1962, its Old Quarter is a tangled maze of narrow one-way lanes and ancient archways that reveal a 500-year Muslim influence, enhanced by a Christian architectural blueprint during the periods that followed.


During the Reconquista, Arcos, Jerez and other newly Christian-controlled towns were collectively assigned the name ‘de la Frontera’. Each an integral part of the fiercely disputed province of Cadiz, they became the new frontier as the Moors were gradually driven back towards North Africa.


A 150 vertical metre drive (or ride if you’re willing), via the lower slopes of Arcos’s newer town, terminates abruptly at the foot of the sandstone Castillo de los Duques. Originally the residence of the Taifa Kings during the Moorish reign, it was rebuilt by the Christians as part of their campaign to maintain control of the strategically important town. Similarly, the main mosque, which once stood on the opposite side of the Plaza del Cabildo, was demolished and a church, the Iglesia de Santa Maria Basillica (Church of Santa Maria), built in its place. 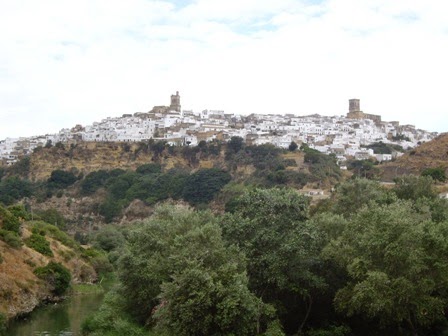 The beating heart of its Old Town, Arcos’s cobbled main square is more than an architectural and historical showcase for the changing tide of events throughout the Muslim-Christian eras. Though somewhat tarnished by its cholesterol-choked car park, its dramatic views of the fertile river valley below, and the Sierra de Grazalema to the west, are an affirmation of why this region was so sought after.